Etymology: referring to stipes (of basidiomata) with appendages.

Diagnosis: is distinct from the closest species A. subvirens by larger and differently coloured pileus, longer and wider stipe, presence of pleurocystidia and caulocystidia and putative association with Shorea sp.

In the field, Austroboletus subvirens (Hongo) Wolfe [≡ Porphyrellus subvirens Hongo], A. lacunosus (Kuntze) T.W. May & A.E. Wood [≡ A. cookie (Sacc. & Syd.) Wolfe] and A. novae-zelandiae (McNabb) Wolfe [≡ Porphyrellus novaezelandiae McNabb] are quite similar (as far as the stipe surface is concerned) to the present taxon. But, A. subvirens (probably the closest species being reported earlier from Japan, Papua New Guinea, China, Americas and Australia and labelled the Australian Material here with GenBank numbers KP242207, KP242214, KP242212 and KP242210) has distinctively smaller (25–60 mm) and differently coloured pileus, shorter and thinner stipe (50–90 × 4–10 mm), and lacks pleuro-, cheilo- and caulocystidia (Wolfe 1979; Jian-Zhe 1985). Moreover, A. subvirens are found to be associated with the trees of Fagaceae in Australasia and Americas and Acacia, Allocasuarina and Eucalyptus in Australia (Wolfe 1979; Horak 1980a, c; Halling et al. 2006) whereas, A. appendiculatus (present species) grows under Shorea robusta (Dipterocarpaceae). Austroboletus novae-zelandiae (reported from New Zealand and New Caledonia and labelled with GenBank numbers accession number HM060327) is separated from the present species by distinctively shorter and slender stipe (70 × 8 mm), bigger (17–19.5 × 8–10.4 µm) basidiospores (Wolfe 1979). Austroboletus lacunosus (reported from Australia and labelled with GenBank accession number KC552014) can also be separated from the present taxon by smaller pileus (15–25 mm), and stipe (20–50 × 5–6 mm) and smaller (32.5–56 × 10–15.5 µm) caulocystidia (Wolfe 1979).

Considering the spore ornamentation, A. fusisporus (reported from Japan and China and labelled with GenBank numbers AB509830 and JX889719) also appears close to A. appendiculatus but the former has altogether different and very small (pileus 5–20 mm, stipe 20–45 × 2–4 mm) basidiomata (Wolfe 1979).

Our ITS phylogeny were obtained by the neighbour-joining analysis criterion considering the all available ITS sequences available in GenBank and/or appeared in BLAST search with the sequence of our Indian material. The new sequence forming a separate clade is clustered (80% bootstrap) with the sequences of A. subvirens derived from Australian Material. These two species in turn is clustered (80% bootstrap) with A. festivus (sequence derived from specimen collected from Guyana).

Unique combination of macro- and micromorphological features coupled with ITS phylogeny clearly support the novelty of Austroboletus appendiculatus. 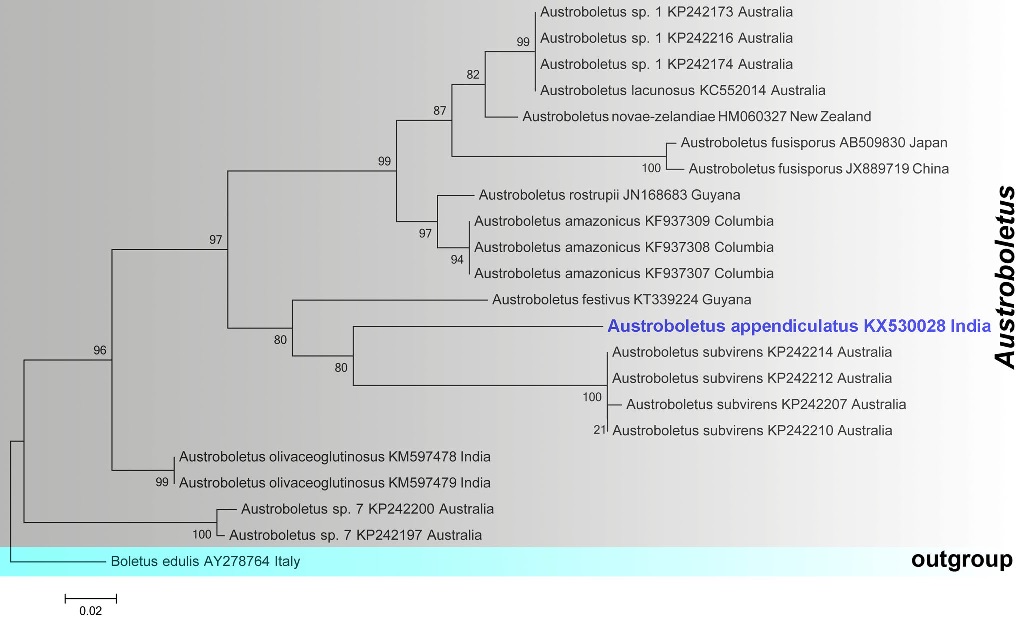 Phylogenetic relationships inferred from neighbour-joining analysis of ITS-rDNA sequences of 22 taxa. The optimal tree with the sum of branch length = 0.82684195 is shown. The percentages of replicate trees in which the associated taxa clustered together in the bootstrap test (1,000 replicates) are shown next to the branches. The tree is drawn to scale, with branch lengths in the same units as those of the evolutionary distances used to infer the phylogenetic tree. The novel Indian species: Austroboletus appendiculatus having GenBank numbers accession number KX530028 (ITS-rDNA) is shown in bold and blue. The topology is rooted with Boletus edulis. Evolutionary analysis was conducted in MEGA 6.0 (Tamura 2013). 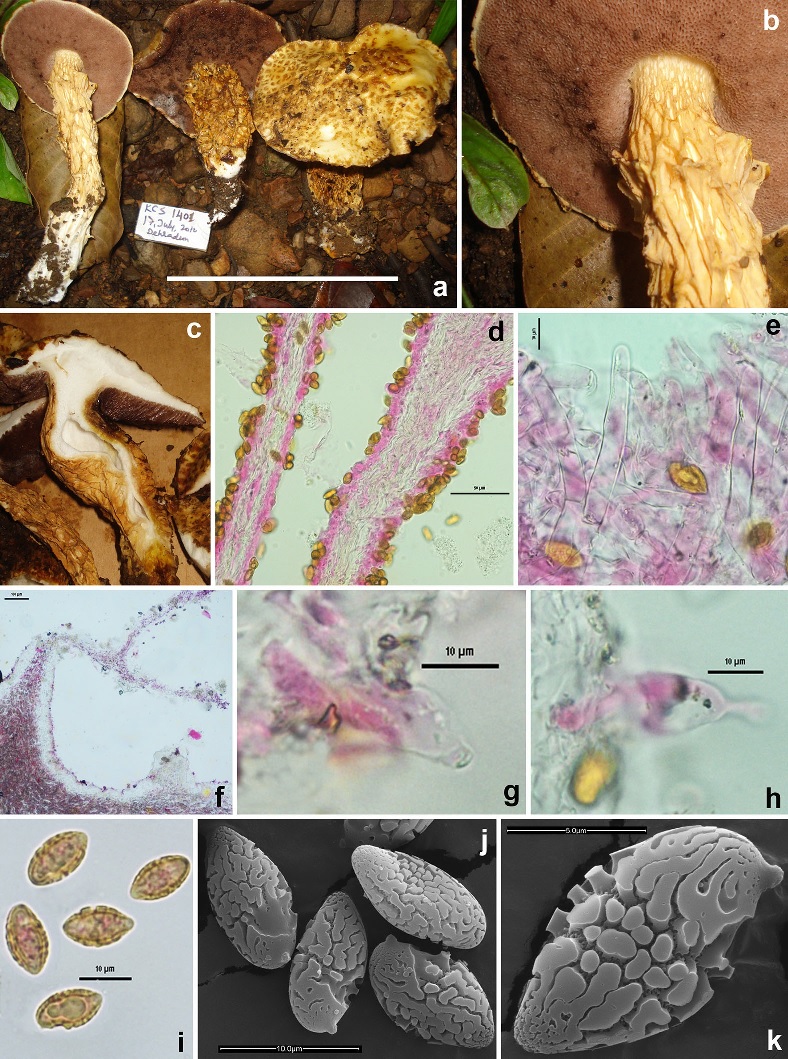 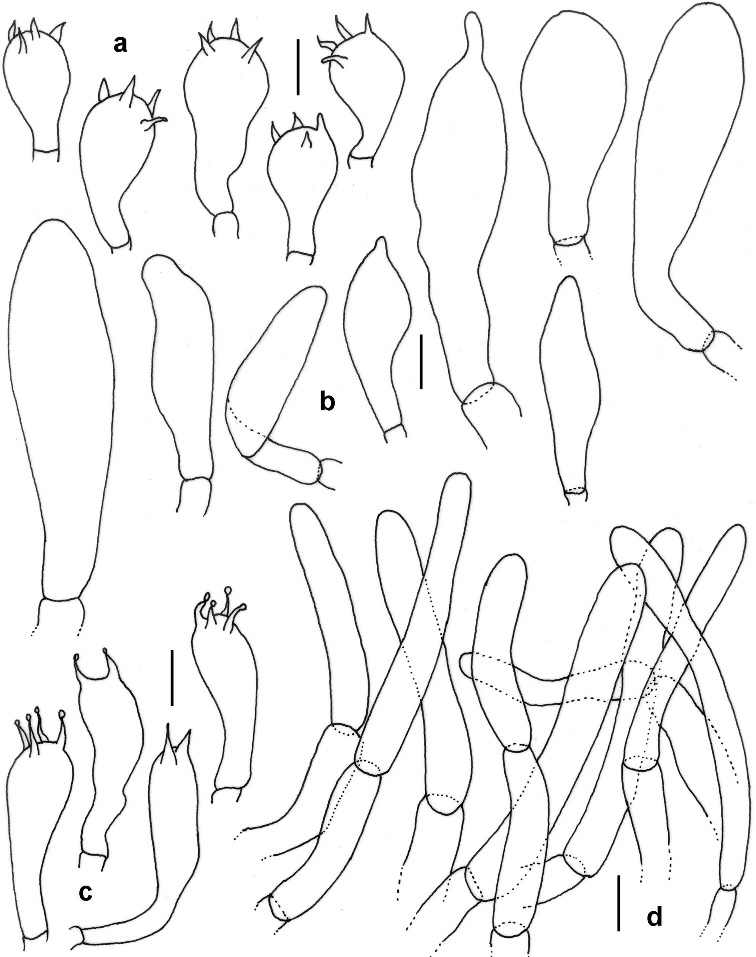