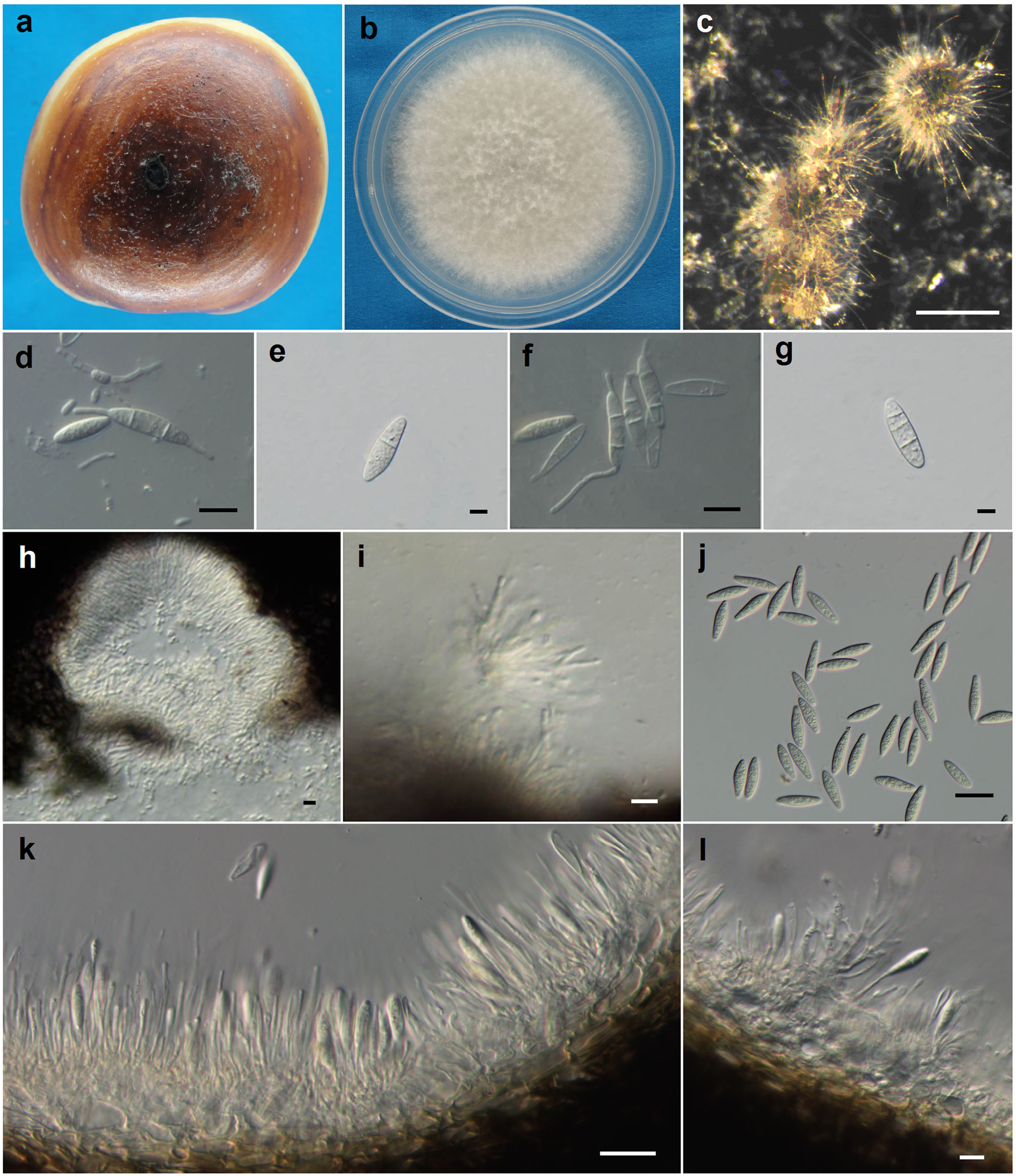 Colonies on PDA attaining 52 mm diam. after 4 days at 25 ºC in the dark, initially white with moderately dense, appressed mycelial mat and aerial mycelium without columns, gradually becoming grey to dark grey. The reverse side of the colonies at first white, but after 2–3 days becoming dark green to olive-green from the centre. This colouration gradually spreads to the edge and becomes darker from the centre until the entire underside of the colony is black. Conidiomata absent in culture on PDA or on MEA in the dark, formed under the 12-hour interactive treatment with black light and fluorescent lamp within 15–20 d, superficial, dark brown to black, globose, mostly solitary and covered by mycelium. Conidiogenous cells holoblastic, hyaline, sub-cylindrical, 7-18 × 2-4 μm, proliferating percurrently with one or more proliferations and occasionally resulting in periclinical thickening. Conidia produced in culture similar to those formed in nature, narrowly fusiform, or irregularly fusiform, base subtruncate to bluntly rounded, smooth with granular contents, widest in the middle to upper third, (18.5–)20–24.5(–26) × 5–7(–8) μm (mean ± SD = 22.3 ± 2.1 × 6.2 ± 0.9 μm, n = 60, L/W ratio = 3.6), forming 1–3 septa before germination. Microconidiomata globose, dark brown to black. Microconidiophores hyaline, cylindrical to sub-cylindrical, 3–10 × 1–2 μm. Microconidia unicellular, hyaline, allantoid to rod-shaped, 3–8 × 1–2 μm. Sexual state not observed in culture.

Sequence data: Molecular data is available in GenBank for the epitype of Botryosphaeria kuwatsukai, HMAS 245112 (PG 2).

Notes: Miura (1917) found ring rot disease on pears and named the fungus as “Coniothecium”. Kuwatsuka (1921) said that the fungus belonged to “Macrophoma”, and Hara (1930) described it as Macrophoma kuwatsukai Hara. The original description was only in Japanese. Nose (1933) found the sexual stage, which he described as Physalospora piricola Nose, also with only a Japanese description. Yamamoto (1961) transferred the fungus to Guignardia piricola (Nose) W. Yamamoto, but this was not accepted by others. Koganezawa and Sakuma (1984) proposed the name, Botryosphaeria berengeriana De Notaris f. sp. piricola Koganezawa & Sakuma for the fungus causing apple wart bark to separate typical B. berengeriana (= B. dothidea) causing cankers on apple and pear. Even though there was no Latin description or diagnosis for both Macrophoma kuwatsukai and Physalospora piricola, they are validly published (Art.39.1). Macrophoma kuwatsukai has priority over Physalospora piricola, even though it is an asexual stage name (Art.59.1), and should be treated as the basionym.

Botryosphaeria kuwatsukai, which had been always confounded with B. dothidea, was described and identified in this study based on multiple locus genealogies. Biological characteristics including the aerial mycelia growth, mycelial growth rate and pathogenicity also supported the segregation of these two species. Morphologically, however, it is hard to discriminate B. kuwatsukai from B. dothidea as they produce similar conidia. In the original description of Macrophoma kuwatsukai Hara (1930), the holotype was not designated. The illustration should be treated as the lectotype. Based on the lectotype, it is hard to discriminate it with other morphological similar species, thus we designate an epitype here.

Botryosphaeria kuwatsukai is the pathogen responsible for apple ring rot and pear ring rot. It can cause soft, light-coloured rot on fruit, especially during storage, and extensive cankers and/or warts on branches and trunks, resulting in serious economic losses to fruit farmers.

Biosecurity: So far, Botryosphaeria kuwatsukai has been found in China, Japan and America. Therefore, this organism should not be treated as a quarantine object in the import and export trade.

There appears to be no known biochemical studies on Botryosphaeria kuwatsukai. This species should be assessed for its chemical diversity and novel compounds.

Nose T (1933) On the ring rot of pears and the causal organism, especially on its perfect generation Physalospora piricola. Ann Agric Exp Sta Chosen 7 (2):156-163 (in Japanese)

Yamamoto W (1961) Species of the genera of Glomerella and Guignardia with special reference to their imperfect stages. Science Reports of the Hyogo University of Agriculture 5 (1):1-12 (in Japanese)