Etymology: the name refers to the locality where it was collected.

Notes: Tyromyces amazonicus is easily recognized by the dimidiate to resupinate, brownish basidiomata and the round to angular, 2–4 per mm, pores. The presence of bottle-shaped cystidioles is similar to those of Obba valdiviana (Rajchenb.) Miettinen & Rajchenb., but this species has encrusted tramal hyphae not seen in T. amazonicus. Obba is placed in the “Gelatoporia clade” either as sister group of the clade composed by “Antrodia clade” + “Tyromyces clade” or as sister group of the “core polyporoid clade” (Binder et al. 2013). The new species may represent a new genus in the “Gelatoporia clade”, but for the time being we will keep it in Tyromyces because of the morphological similarities.

Flaviporus is a tropical genus characterized by the small and thin basidiomata, small pores, small and ellipsoid spores and the dimitic hyphal system with clamp connections (Ginns 1980). The specimens of this clade were identified as F. liebmanii, which has tramal cystidia, sometimes hard to visualize. Although the main clade of F. liebmanii has high statistical support (0.90/85), the genetic variation among the species is very high and the specimens may represent at least two species. Miettinen et al. (2012) suggested this is caused by parallel evolution, by which basidiomata morphology can remain unchanged while nrDNA undergoes major changes.

Miettinen and Ryvarden (2016) introduced the new genus Trulla based on Miettinen et al. (2012) to accommodate neotropical species of Antrodiella with monomitic context and the dimitic trama, differently from Antrodiella sensu stricto with dimitic context and trama and from the temperate zone. Trulla meridae Miettinen & Ryvarden and T. dentipora (Ryvarden & Iturriaga) Miettinen & Ryvarden are the first records to Brazil and both were previously known only to Venezuela (Ryvarden and Iturriaga 2003; Miettinen and Ryvarden 2016). Additionally, T. meridae was only described morphologically and in this study it is confirmed by molecular data as belonging in this genus. 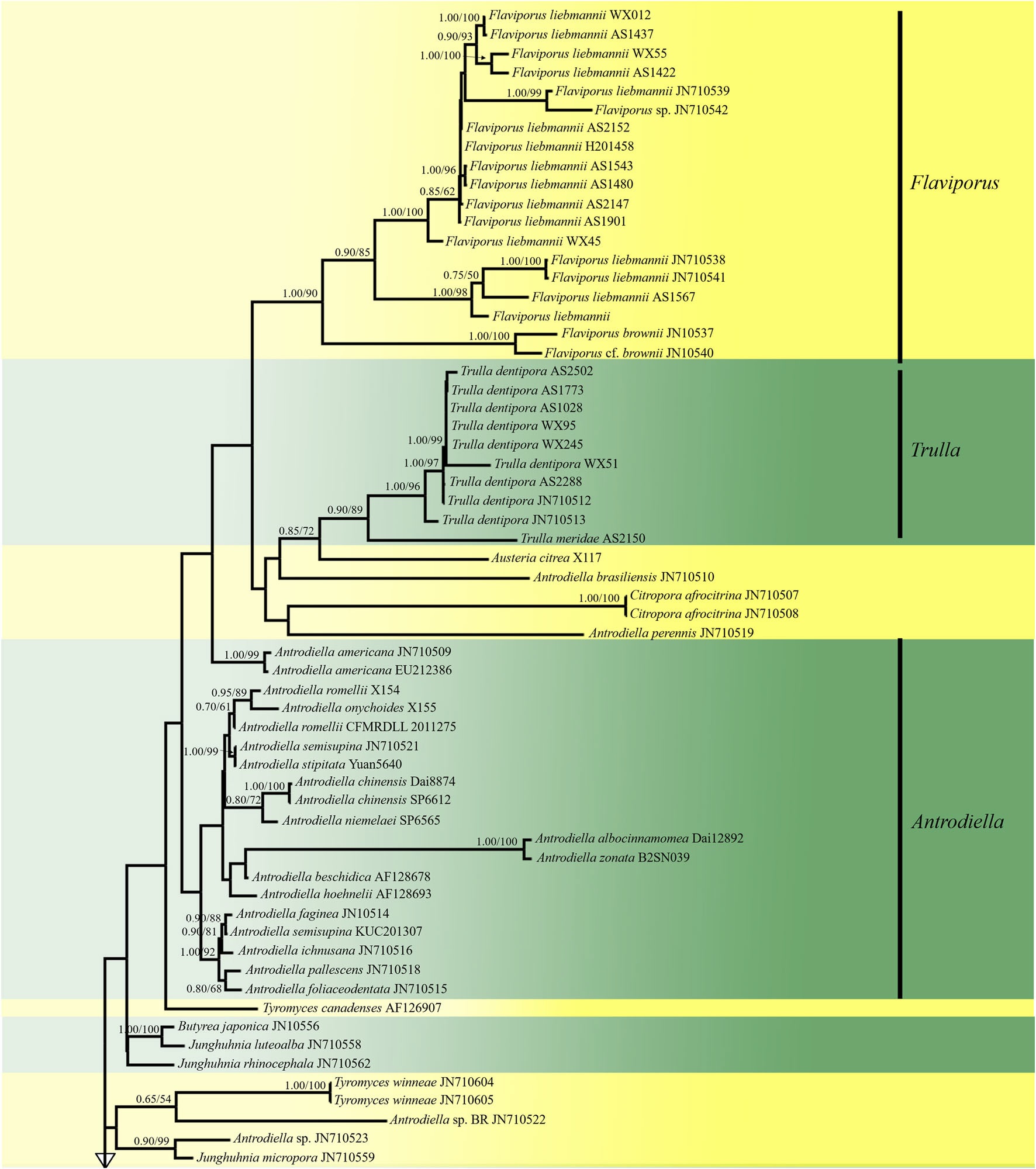 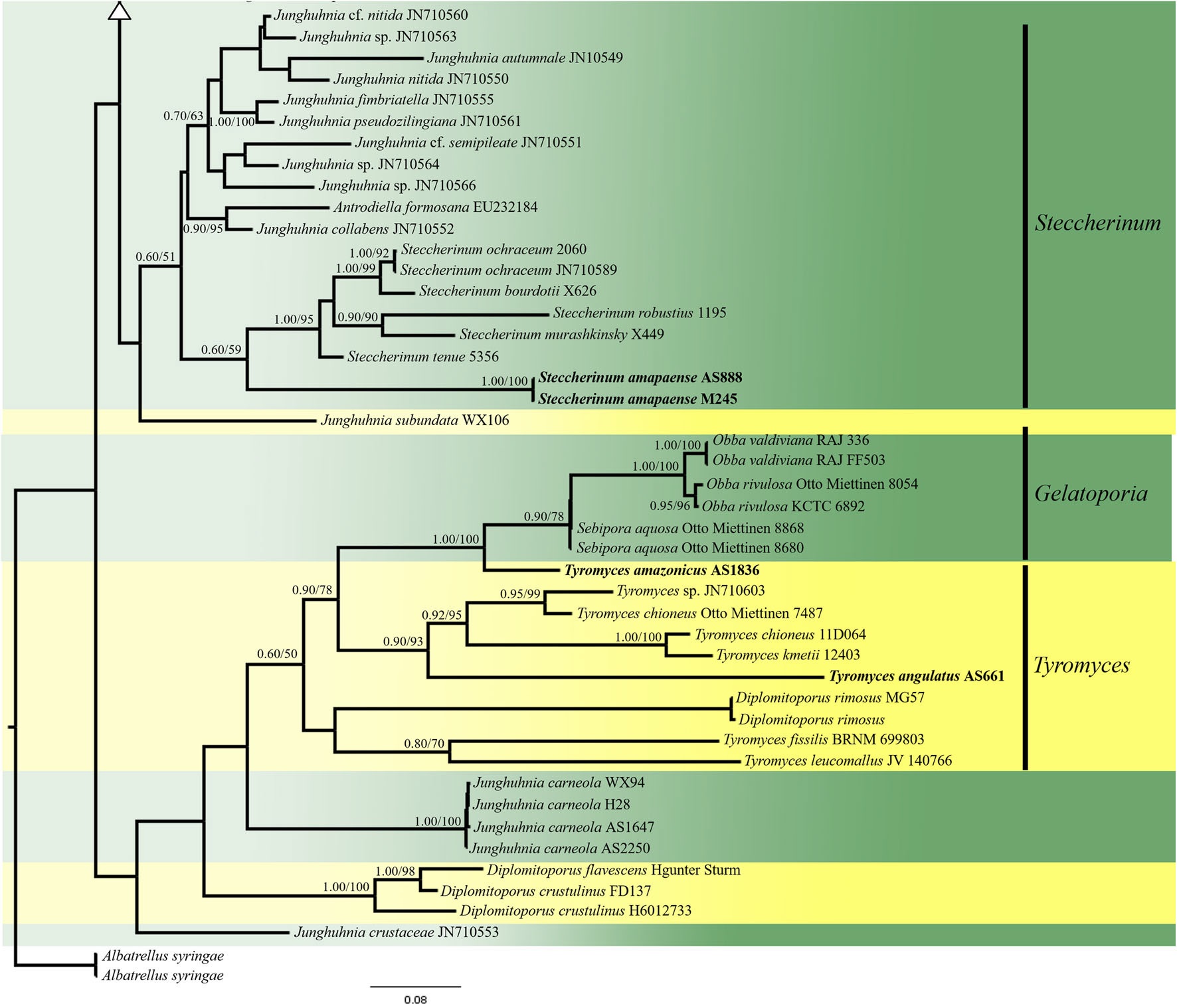 Maximum likelihood phylogenetic tree of the concatenated ITS1, 5.8S, ITS2 and partial 28S rDNA sequences. Bootstrap supporting values (1000 replicates) and posterior probabilities (PP) from Bayesian analysis to each node are shown from left to right. Only bootstrap values above 50% and PP above 0.75 are provided. The new species described in this study are in bold. The tree was rooted with Albatrellus syringae 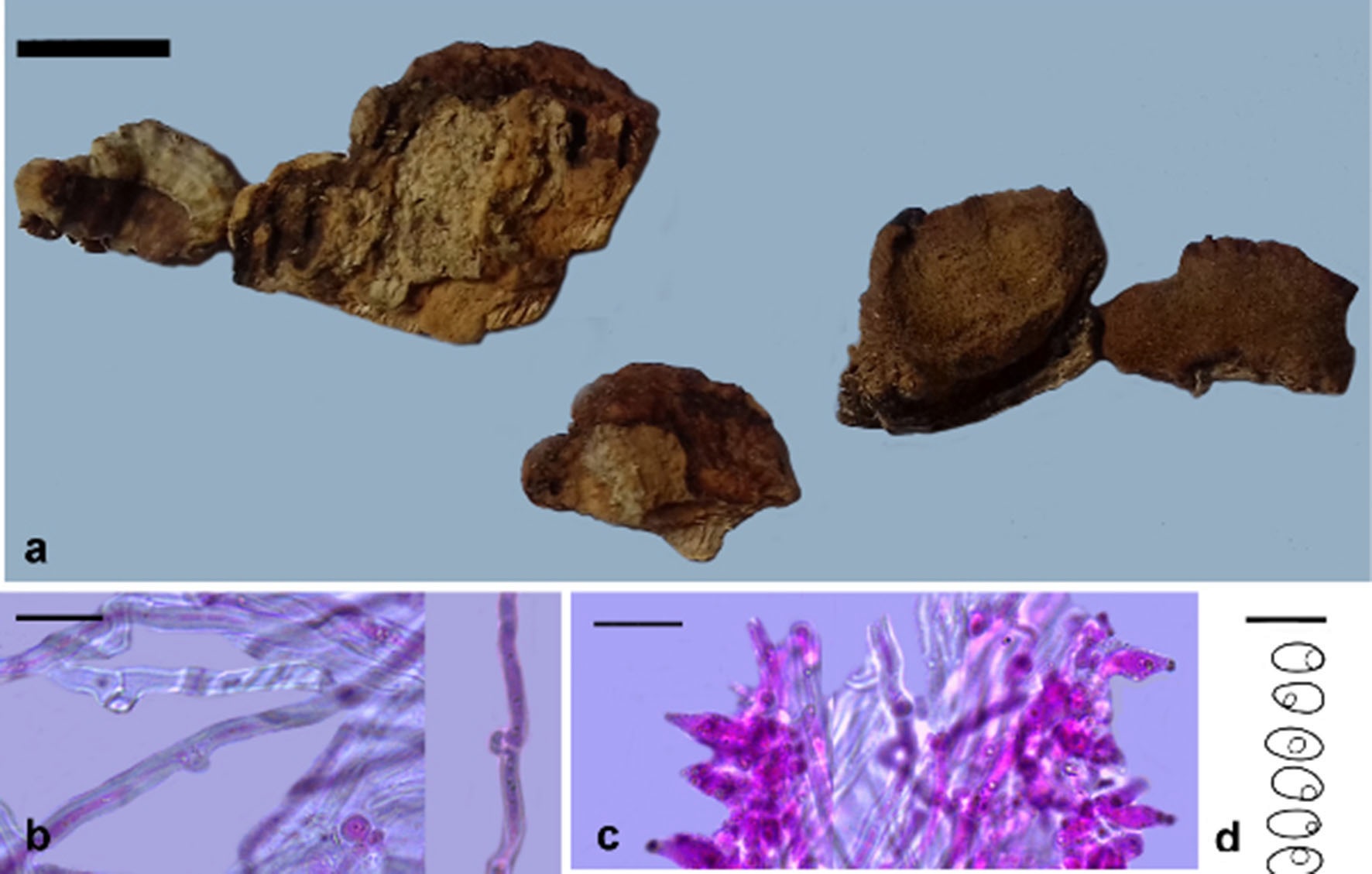