Etymology: refers to the red colour of the cap.

Until now, R. rhodocephala has been referred to as R. sanguinea Fr. Both R. rhodocephala and R. sanguinea are associated with Pinus (Bills and Miller Jr 1984). Even though the European R. sanguinea appeared as the sister to our species with significant support, it differed from our species by more than 3% in the ITS2 region. PlutoF maps showed that their distributions differed. The only records of sequences matching R. rhodocephala at 99.5% identity cutoff were from the American west: [Canada: Rocky Point, Victoria, BC (UDB031015), U.S.A.: California (GU180315), corresponding to UNITE SH DOI: https://plutof.ut.ee/#/datacite/10.15156/BIO/SH297359.07FU. Relaxing the identity cutoff to 99%, samples with a wider geographical distribution across the United States and Mexico were included: https://plutof.ut.ee/#/datacite/10.15156/BIO/SH130463.07FU. Further relaxing the cutoff to 97% cutoff included sequences found from Korea, China and Japan (March 2017): https://plutof.ut.ee/#/datacite/10.15156%2FBIO%2FSH030433.07FU. Reflecting their sequence differences, European Russula sanguinea corresponded to UNITE SH218425 represented by sample R. sanguinea UDB011161, while N. American R. rhodocephala (accessioned into GenBank as “R. sanguinea“) corresponded to UNITE SH218433.

The spore print colour described should be verified due to the surprisingly wide range recorded by Woo. However, a similar wide variation in spore print colour is given on Mushroomexpert.com for the eastern U.S. taxon identified as R. sanguinea (“creamy to yellowish or orange-yellow” (Kuo 2009).

The species could be confused with R. americana Singer, which appears a somewhat less robust taxon associating with Tsuga and perhaps also Abies, and has larger spores, 8.5–11.5 × 7–l0.8 (Singer 1939). R. americana also matches the description of R. rosacea var. macropseudocystidiata Grund. Detailed descriptions can be found in Roberts (2007) who distinguished R. americana from R. rhodocephala (under the name ‘R. sanguinaria’) by its taller and more slender habit and by its association with western hemlock (and possibly Abies) rather than pines. Unlike R. americana, R. rhodocephala is generally found in wet areas, often shows yellow staining on the lower stipe, and it has a more evenly coloured and shiny cap with the epicutis an ixotrichodermis. Most other red-capped, acrid species in the area produce whitish gills and spore prints, while the otherwise very similar R. californiensis Burl. grows with pine and oak in California, has a pale yellowish spore print, a more distinctly greying stipe, and especially, a distinctly more reticulate spore ornamentation (Burlingham 1936). 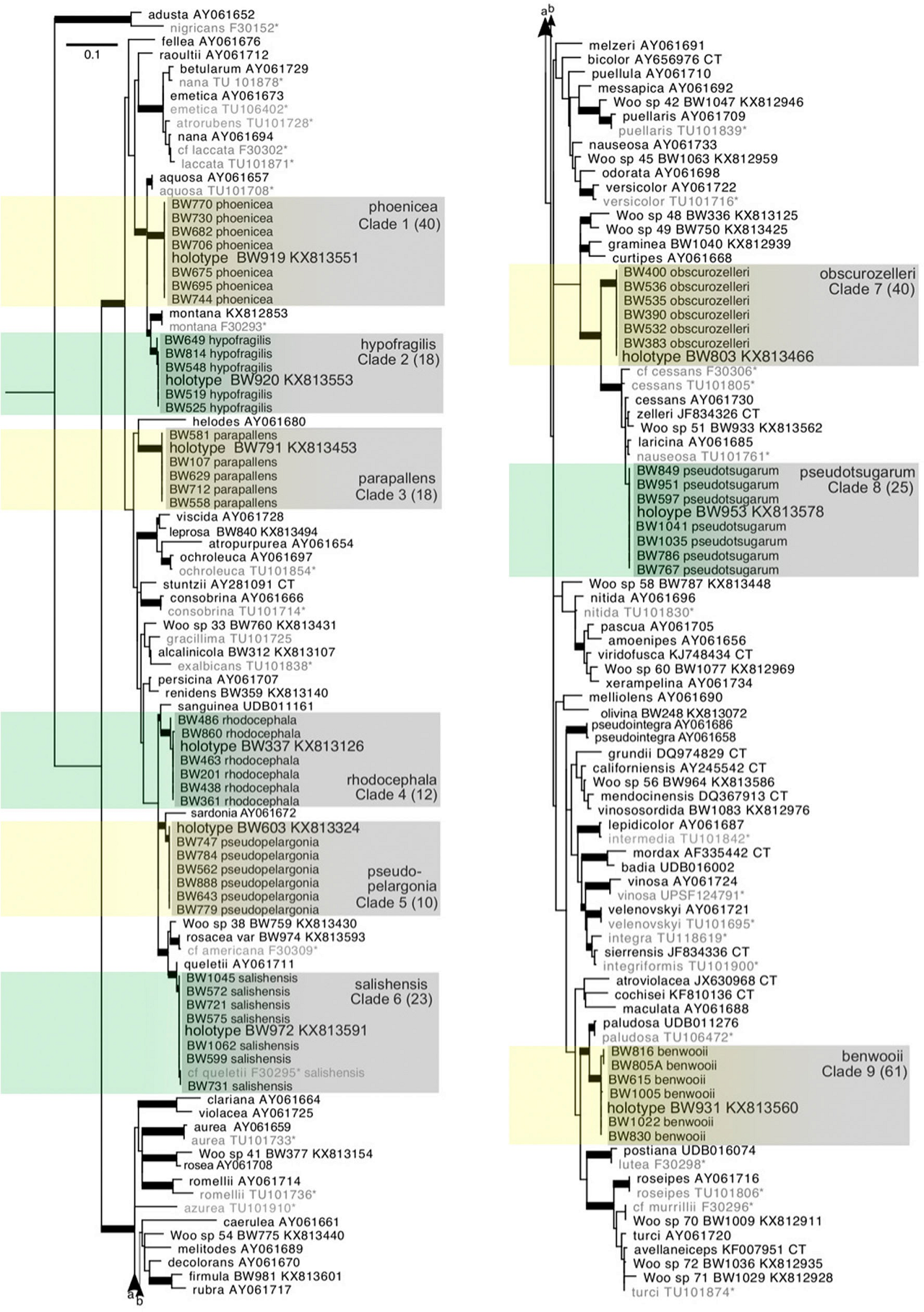 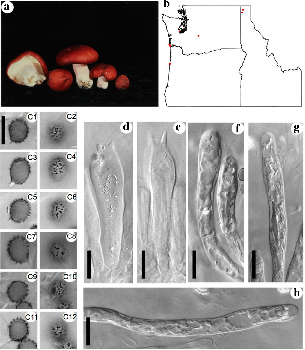