Etymology: The generic epithet ‘‘Septomelanconiella’’ reflects the septation of the conidia and parallel morphology to Melanconiella. 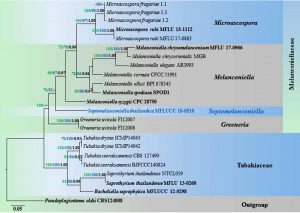 Fig 1. – Phylogram generated from maximum likelihood (RAxML) based on ITS, LSU and RPB2 partial sequence data analyses of 23 taxa and Pseudoplagiostoma oldii (CBS 124808) as an outgroup taxon. Bootstrap values for maximum parsimony (green) and maximum likelihood (blue) C 50% and Bayesian posterior probabilities (black) C 0.90 are given at the nodes. The newly generated sequence is in blue. The ex-type strains are in bold. The scale bar represents the expected number of nucleotide substitutions per site.