Notes: Subglobosporium is introduced as a new genus in Pseudocoleodictyosporaceae with Su. tectonae as the type species. The characteristics of Subglobosporium are conidia in punctiform, superficial colonies in pits or cracks on bark, black, globose to subglobose on natural substrates. It is proposed that Subglobosporium has a unique morphology compared to other hyphomycetes (Seifert et al. 2011). This genus forms a distinct lineage from other taxa in Dothideomycetes based on LSU sequence data which was obtained from Hyde et al. (2013), as well as multi-gene phylogenetic support in this study. 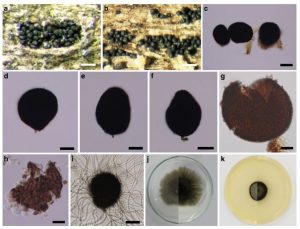