Culture characteristics: Ascospores germinating on PDA within 24 h. Germ tubes produced at the ends of the ascospores. Colonies on MEA reaching 13–15 mm diam. after 7 days in the dark at 25 °C (x = 14 mm, n = 5), edge entire, flat or effuse on the old mycelium plugs, sparse, slow growing, yellowish brown (5F4) in the center, orange white (5A2) at the edge from above, greyish brown (5F3) at the center and yellowish white (4A2) at the edge from below. Mycelium 3.5– 11μm wide, aerial to immersed, pale brown to reddish brown, septate, branched, slightly constricted at the septa, with some melanin deposits. Chlamydospores developing in culture, catenate, intercalary or terminal, initially hyaline, becoming pale brown to reddish brown at maturity, subglobose to ellipsoidal, 1-celled, thick and smooth walled.

Notes: Boerlagiomyces was established by Butzin (1977) with B. velutinus (Penz. & Sacc.) Butzin as the type species. This genus presently comprises eight species according to Index Fungorum (2016). Boerlagiomyces macrosporus has been synonymized with Thaxteriella macrospora by Crane et al. (1998) based on the ascomata being erumpent through bark rather than superficial, loculate and glabrous rather than covered with setae or hyphal appendages. However, Crane et al. (1998) did note that the ascospores were atypical as they are muriformly septate, not a feature of Thaxteriella (which has phragmosporous ascospores). The nomenclature of Crane et al. (1998) is rejected in preference to the name B. macrospora based on phylogenetic analyses (see above). MFLU 15–3422 obtained from T. grandis in this study is identical to AHM 3874 (holotype) as described in Rao and Varghese (1979) in having superficial, globose ascomata, with out setae on the surface, but with black basal mycelium; ascospores sub-ellipsoid, muriform, olivaceous brown, with subhyaline terminal cells and up to 14 transverse septa. The ascoma and ascus dimensions are similar even though ascospore dimensions in the latter are slightly different, as the ascospores might be variable in size due to different substrates. MFLU 15–3422 is treated as B. macrospora and MFLUCC 12–0388 is maintained as a reference specimen for this species. 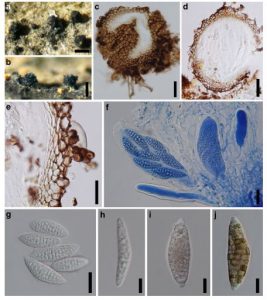 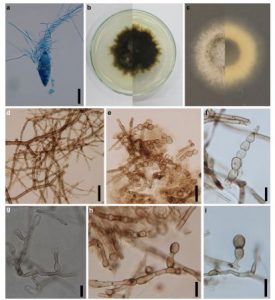