Tubeufiales was established by Boonmee et al. (2014b) based on phylogenetic analyses and morphology. Liu et al. (2017) treated Bezerromycetaceae and Wiesneriomycetaceae as families of Tubeufiales on the basis of divergence time estimates. The latest comprehensive revision on Tubeufiales was carried out by Lu et al. (2018b), who expanded the circumscription of the type family Tubeufiaceae, accepted 42 genera in this family, and revised the taxonomy of tubeufiaceous species. This revision, in particular, helped to high- light fungi which were misidentified and resolved which morphs are important in classifying species. Tubeufiaceous fungi have the potential to produce bioactive compounds (Ohtsu et al. 2003; Lu et al. 2018b; Fan et al. 2019). Fan et al. (2019) tested the antifungal and anticancer effects of 19 tubeufiaceous strains, and found that most of them showed obvious bioactivities. We introduce a new morphological record of Tubeufia longiseta. The divergence time for Tubeufiales is estimated as 234 MYA (stem age, Hongsanan et al. 2020). 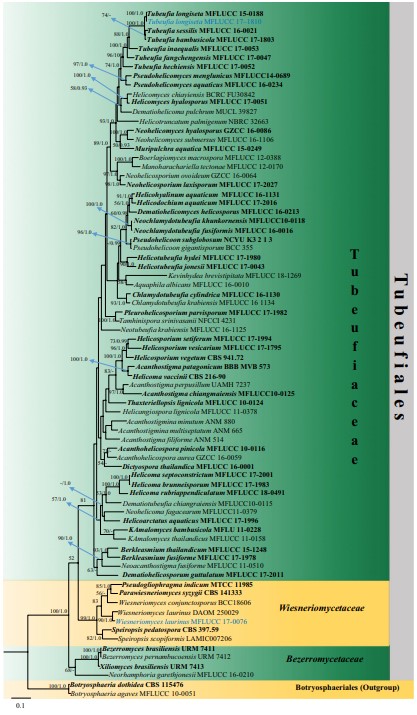 Fig. 82 Phylogram generated from maximum likelihood analysis (RAxML) of genera in Tubeufiales based on ITS, LSU, rpb-2 and tef1 sequence data. Maximum likelihood bootstrap values equal or above 70%, Bayesian posterior probabilities equal or above 0.90 (MLBS/ PP) are given at the nodes. An original isolate number is noted after the species name. The tree is rooted to Botryosphaeria agaves (MFLUCC 10-0051) and B. dothidea (CBS 115476). The ex-type strains are indicated in bold. Hyphen (-) represents support values below 70% MLBS and 0.90 PP