Notes: nBLAST results of the obtained sequence place R. shoreae in subg. Heterophyllidiae, which was also clearly suggested by its morphological characters, including the inamyloid suprahilar spot, the typical ramifying hyphal extremities at the pileus surface composed of chains of more or less inflated, short cells that become gradually narrower toward the terminal cell and one-celled, narrow pileocystidia.

In our ITS phylogenetic analysis, the here newly described R. shoreae is placed sister to the Chinese R. verrucospora Y. Song & L. H. Qiu. Both are again placed sister to the North American and equally green R. redolens Burl. These three species form a strongly supported clade, which is placed sister, again with strong statistical support, to the annulate R. brunneoannulata Buyck of the African subsect. Aureotactinae Heim ex Buyck (Buyck 1994). All these species have very similar microscopic features of pileipellis and share the same type of spore ornamentation consisting of isolated blunt warts. Some of the abovementioned species were also grouped with strong support in recent multilocus phylogenies. A representative sampling of species belonging to subg. Heterophyllidiae was distributed over four significantly supported clades in the combined multilocus phylogeny, based on 28S, rpb2 and tef1 loci, that was published by Wang et al. (2019). In that phylogeny, subsect. Substriatinae was introduced as a new subsection that grouped with Aureotactinae as one of the four strongly supported clades in the subgenus. This topology was never recovered in ITS-based phylogenies, nor in the combined multilocus (based on the same loci) published by Vera et al. (2021) where the placement of Aureotactinae was affected by the introduction of R. redolens and no longer grouped with Substriatinae. 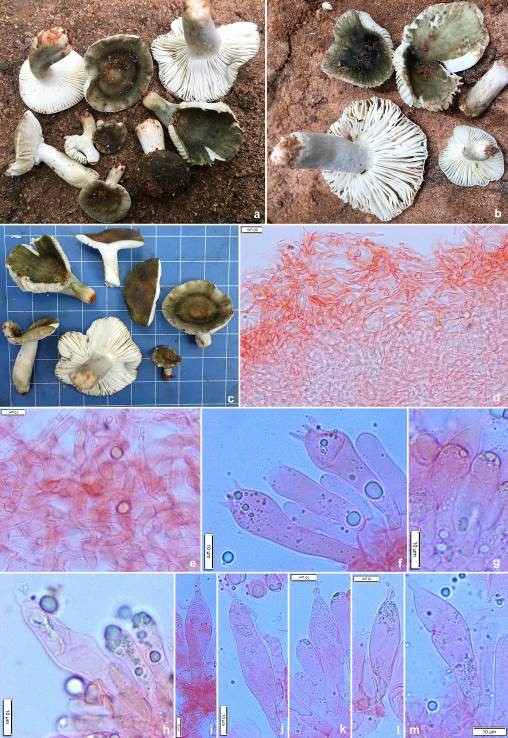