Etymology: the species epithet ‘ruiliensis’ refers to the location Rili where the type collections were found.

Diagnosis: the new species is characteristic by growing on grassland in the southern subtropical region, basidiomata are somewhat bluish when touched or bruised, having bright reddish orange-brown to yellowish brown and hemisphaeric or subhemisphaeric pileus, the pileus with or without umbo, ellipsoid to subhexagonal basidiospores of medium size 9–11 × (5.5–) 6–7.5 × 5.5–7 μm, slender to stout and fusiform to clavate cheilocystidia, and the form of pleurocystidia similar to the stout pleurocystidia.

Habitat: Growing solitary to scattered and gregarious on grassland near a reservoir where cattle and horses have grazed in early autumn.

Note: Psilocybe ruiliensis was only found growing on grassland in the southern subtropical region (close to tropical) of western Yunnan at a relatively low altitude. It can be distinguished by its bright reddish orange-brown to yellowish brown and hemisphaeric or subhemisphaeric pileus, ellipsoid to subhexagonal basidiospores with medium size in face view, slender to stout cheilocystidia, and the presence of pleurocystidia. Phylogenetically, P. ruiliensis forms a monophyletic clade with high BS support (100%) and pp value (1.00) and groups with P. mexicana, P. tampanensis and P. samuiensis (sect. Mexicana) and P. caerulescens (sect. Cordispora) sensu Guzmán (1995) (Fig. 3). In this group, P. ruiliensis and P. samuiensis Guzmán, Bandala & J.W.Allen cluster together.
These taxa are similar in some features of their basidiomata, habitat and basidiospores, but P. samuiensis differs in having a smaller and convex to conic-convex to campanulate pileus and relatively slender stem. Microscopically, the slightly larger hexagonal and subrhomboid basidiospores (9.6–12.0 × 6.4–8.4 μm), the ventricose-lageniform cheilocystidia and pleurocystidia, and the relatively slender pleurocystidia and basidia can easily separate P. samuiensis from P. ruiliensis (Guzmán et al. 1993, Ramírez-Cruz et al. 2013). Morphologically, P. ruiliensis is related to stirps Mexicana according to Singer (1986) because of the medium sized spores, mycenoid habit and growing in open places on soil. It is also related to Sect. Mexicana sensu Guzmán because of the size of spores, the mycenoid habit and the subtropical habitat, although the shape of its basidiospores is partly subrhomboid. In sect. Mexicana sensu Guzmán, besides P. samuiensis mentioned above, P. ruiliensis bears some superficial resemblance to P. mexicana. Both species grow on subtropical grasslands, but the different shape of fruit body, the absence of pleurocystidia, and the subrhomboid spores of P. mexicana easily distinguish them (Singer and Smith 1958, Guzmán 1983). In many aspects, P. ruiliensis is also similar to P. gallaeciae Guzmán & M.L. Castro and P. galindii Guzmán, but the latter two species have pseudorhiza. In addition, P. gallaeciae has a different coloured pileus, slightly broader and thicker-walled spores, and lageniform pleurocystidia and cheilocystidia. Psilocybe galindii has relatively slender basidiomata, smaller basidia, and slightly larger and subrhomboid thicker-walled basidiospores, as well as grows at 1700–1800 m elevation (Guzmán 1983, Guzmán & Castro 2003, Ramírez-Cruz et al. 2013). 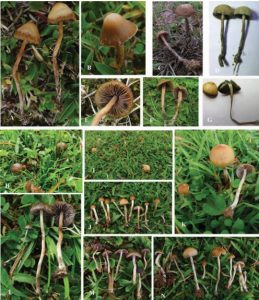 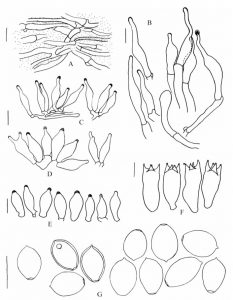 Fig. 3. Phylogram inferred from analyses of a combined LSU and ITS dataset using MrBayes. Values above and below branches are posterior probabilities (pp≥0.80) and RAxML bootstrap (BS≥50%) values. For node with little difference between RAxML and BI analyses, only the pp value is displayed and BS value is not shown but indicated by ‘/’. The terminal taxa represent individual specimens with GenBank accession numbers. nrLSU and ITS numbers are indicated as LSU/ITS and the sequences that are lacking are not shown, and only one number is represented the sequence that is including nrLSU and ITS data. Species from Yunnan province and new sequences generated in this study are in bold.