Etymology: Named in honour of E. B. Gareth Jones for his contributions to tropical mycology.

Culture characters: Ascospores germinating on WA within 24 h and germ tubes produced from ends. Colonies growing fast on PDA, reaching 23 mm in 2 weeks at 25 °C, flat or raised at the center, circular, irregular at the margin, grayish from above, dark brown from below. Mycelium immersed in the media, composed of branched, septate, smooth, grayish hyphae.

Notes: Ligninspaheria is clearly different from other groups within the order of Pleosporales based on molecular data and morphological characters. This monotypic genus is introduced to accommodate those taxa characterized by having deeply immersed ascomata, surrounded by a large blackened clypeus, with long immersed ostioler canal and broad-clavate asci with fusiform ascospores surrounded by a gelatinous cap at both ends. Ligninsphaeria jonesii is similar to Pseudotricha guatopoensis in having immersed, obpyriform ascomata and clavate asci. However, the former is distinct in pseudoparaphyses type (cellular vs. trabeculate), ascospore appendages (gelatinous cap at both ends vs. 5–6 µm wide gelatinous sheath) and ascospore septation (1-septate vs. 3–5-septate) (Huhndorf et al. 1994). The new fungus is also similar with Lophiotremataceae, but differs by its broad-clavate ascus and ascospores surrounded by a gelatinous cap at both ends, while the ascus in the latter taxon is cylindrical and ascospores lack gelatinous appendages (Hirayama & Tanaka 2011). In addition, the molecular analysis showed that this new fungus is phyl==ogenetically close with Astrosphaeriella-like taxa, as well as the families Delistchiaceae and Testudinaceae. However, they have different morphological characters. Morphological characters of this new fungus are obviously different from other genera even families within the Pleosporales, but the phylogenetic placement of these groups is not stable, which may be caused by the lack of molecular data for taxa in these groups. Moreover, only one collection was obtained in this study, which cannot commendably illustrate the phylogenetic relationship with close groups. Therefore, we introduced a new genus Ligninsphaeria to accommodate the new fungus and future studies in tropical regions are likely to collect and provide data for this undersampled group. The recent study on Astrosphaeriellaceae and Pseudoastrosphaeriellaceae is a good example (Phookamsak et al. 2015). 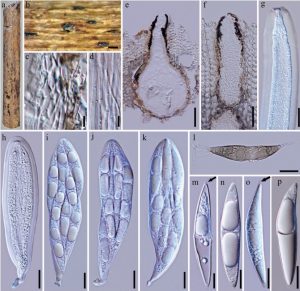