Etymology: The new genus is dedicated to Cláudia Baider, curator of the Mauritius Herbarium (MAU), as an acknowl- edgement of her valuable help to us in exploring the lichens of Mauritius. Cláudia is very interested in the conservation of biodiversity in tropical terrestrial systems, in the impact of alien species in tropical forests, and in the restoration ecology and taxonomy of Mascarene flowering plants.

Notes: – The new genus forms a distinct lineage in the family Roccellaceae, being somewhat related to the gen- era Gyrographa and Sigridea, but relationships between these genera are not supported (Fig. 4). It differs from all genera of Roccellaceae by the combination of a thick crustose, not byssoid thallus, lirelliform ascomata with a carbonized excipulum not covered by a thalline layer, a carbonized hypothecium extending down to the substrate, a pruinose and not tomentose hymenial disc, ascospores without a distinct gelatinous sheath, and a chemistry with psoromic acid as major substance. The genus is reminis- cent of Lecanographa, but species of the latter have asco- spores with a distinct gelatinous sheath, an ascus of the Grumulosa-type, and they belong to a distinct lineage in the family Lecanographaceae. 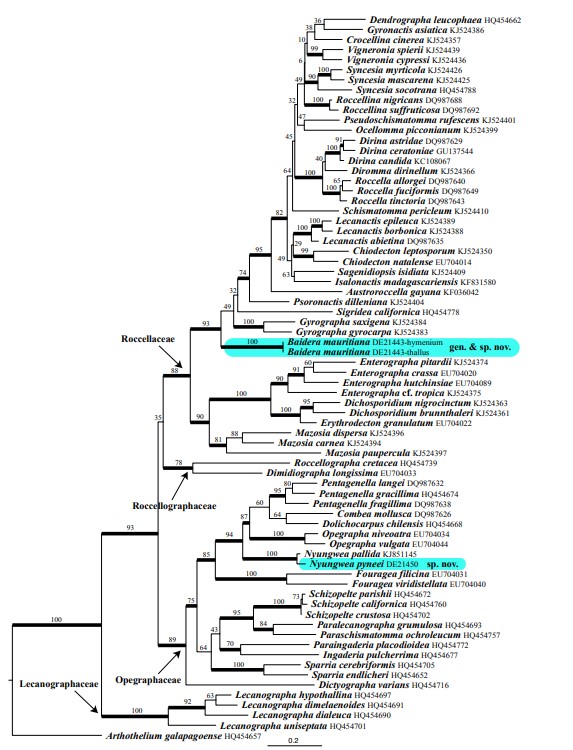 Figure 4. Phylogeny of Arthoniales based on a data set of RPB2 sequences that resulted from a RAxML analysis. Maximum likelihood bootstrap values are shown above or near internal branches. Internal branches, considered strongly supported by both the RAxML and Bayesian analyses, are represented by thicker lines. The newly sequenced samples from Mauritius are highlighted and their names followed by collecting numbers of authors, which act as specimen and sequence identifiers.