The order Asterinales was introduced by Barr (1976) without a Latin diagnosis and was subsequently validated by Hawksworth and Eriksson (1986). Hyde et al. (2013) accepted three families in the order, namely Asterinaceae, Aulographaceae, and Parmulariaceae. Species of Asterinales develop pigmented, superficial hyphae with appressoria and superficial thyriothecia, with elongate or round scutella, that open by slits or star-like fissures. Asci are globose to subglobose, bitunicate and usually include eight, 1-septate, brown, ellipsoid ascospores. Wu et al. (2011) suggested that Parmulariaceae should be included in Asterinales, this was followed by Hyde et al. (2013). In contrast to species of Parmulariaceae with superficial to immersed hypostroma, shield- or star-like, hypostroma composed of cells of textura prismatica and non-appressoriate hyphae, species of Asterinales are characterized by hyphae usually with appressoria, flattened thyriothecia with radially arranged cells in the upper wall, a poorly developed base, star-like or sometimes slit-like openings (Hofmann 2010; Hosagoudar 2012; Hyde et al. 2013).

Fig. 1 RAxML maximum likelihood phylogenetic tree (LSU). Numbers to the left of the nodes are RAxML value expressed from 1,000 repetitions with values above 50 % shown. Numbers to the right of the nodes are Bayesian posterior probabilities, with values above 90 % shown. Strain numbers are indicated after species names. New sequence data are in red and other ex-types are in bold. 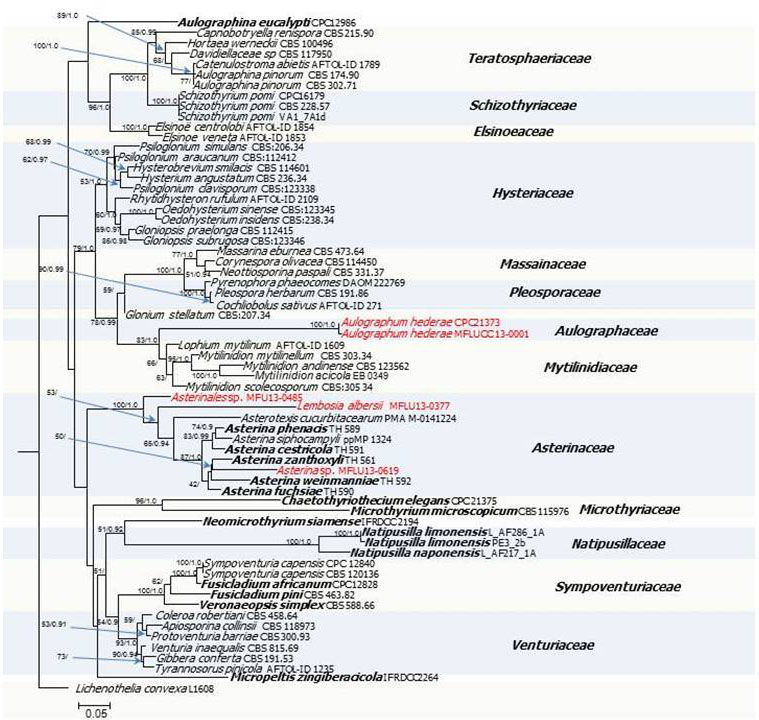