Etymology: Referring to the aquatic habitat and monoblastic conidiogenous cells.

Fig. Maximum likelihood majority rule consensus tree based on a combined LSU, SSU and RPB2 sequence alignment. ML bootstrap proportion greater than 75% and Bayesian posterior probabilities above 0.95 are indicated above the nodes as BP/PP. The scale bar represents the expected number of changes per site. The tree is rooted with Leotia lubrica (AFTOL-ID 1) and Microglossum rufum (AFTOL-ID 1292). The strain numbers are noted after the species names. The new taxa are in bold. Branches with 100% ML BP and 1.0 PP are shown as black nodes, families are indicated in colored blocks. 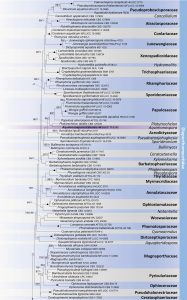 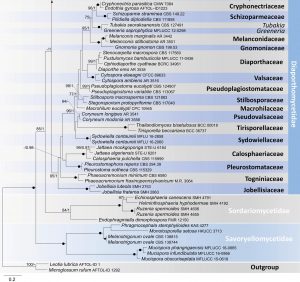