Etymology:– In reference to the morphological resemblance to Diatrype

Notes: – Allodiatrype is introduced to accommodate Allodiatrype arengae, A. elaeidicola, A. elaeidis, and A. (syn. Diatrype) thailandica. Allodiatrype is typified by A. arengae, which was collected from Arenga pinnata (Arecaceae). The morphology of Allodiatrype species is closely similar to that of Diatrype species. However, Allodiatrype differs in having 1–10-ascomata immersed in one stroma, and with or lacking a black stromatic zone, while stromata of Diatrype mostly spread over a large area, sometimes covering the host surface. As becomes evident from Fig. 1, strains of both genera appear in distinct clades in a phylogeny based on multiple strains of both genera, thereby justifying the erection of the new genus Allodiatrype. 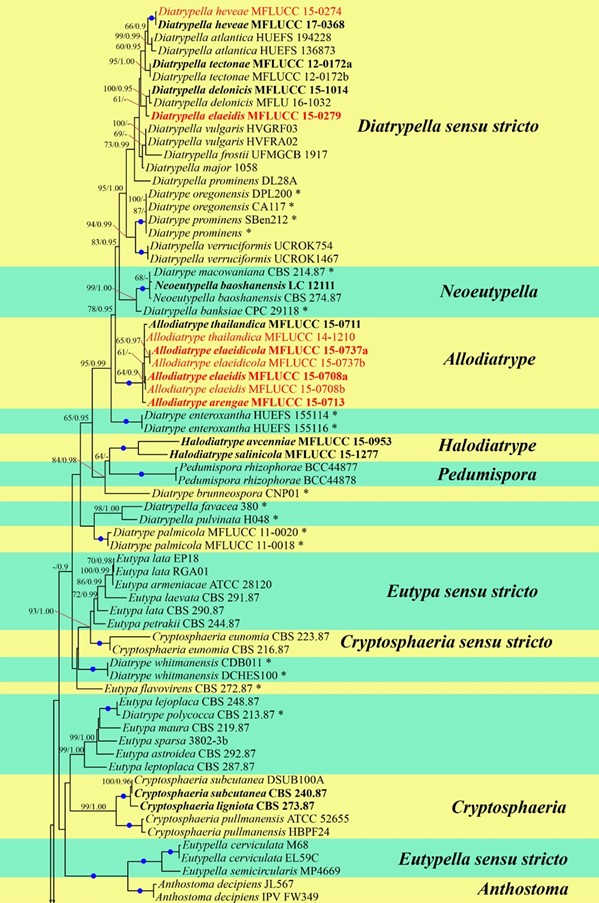 Figure 1 – Bayesian analyses the majority rule consensus tree of selected species in Diatrypaceae generated from combined ITS and TUB2 sequence data. Bootstrap support values for maximum likelihood (ML) greater than 50%, and Bayesian posterior probabilities (BYPP) greater than 0.90 are given at the nodes. Branches with 100% ML and 1.00 BYPP are shown with a blue dot. Ex-type strains are in bold. Newly generated sequences are in red. Novel taxa are in red bold. The asterisks represent unstable species.