Notes – Thyrostroma ulmicola was introduced by Senwanna et al. (2019) based on morphological comparisons and phylogenetic analysis. The new isolate (MFLU 17-2496) was collected from the twigs of Ulmus minor in Russia. The morphology of our isolate is similar to T. ulmicola described by Senwanna et al. (2019a), even though our isolate has longer conidiogenous cells and smaller conidia than in the original description (conidiogenous cells: 11–29 µm vs. 6–13 µm; conidia: 23–32 × 11–17 µm vs. 30–59 × 12–26 µm) (Senwanna et al. 2019a). Phylogenetic analyses of the combined LSU, SSU, ITS and TEF1-α sequence dataset show that our strain (MFLU 17-2496) groups with T. ulmicola with moderate support (88% ML and 0.99 BYPP). According to the NCBI BLASTn search of LSU and ITS sequences, our new isolate showed 99% and 98% similarities to T. ulmicola respectively. Thyrostroma ulmicola has been reported from Ulmus pumila in Russia (Senwanna et al. 2019a). Thus, we identify the new isolate as T. ulmicola and our new collection is a new host record in Russia. Further collections might show the need for novel host-specific taxa. 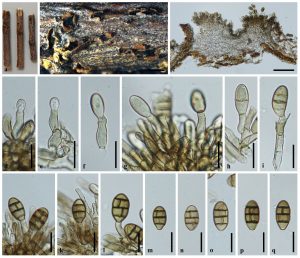