Diagnosis: Differing from Bogoriella in the ascospores with lens-shaped lumina and very thick terminal walls.

Etymology: Named after our colleague and friend, Felix Schumm, for his excellent contributions to our knowledge of the morphology and anatomy of lichen fungi.

Chemistry: no substances detected by TLC.

Notes: This new genus is introduced for a single species with highly unusual ascospores that in their mature stage are reminiscent of Arthoniaceae and Graphidaceae rather than Trypetheliaceae. The species was originally described in the genus Distothelia (Schumm and Aptroot 2013), but the ascospores differ clearly in shape and endospore development, resulting in two strongly thickened terminal walls. Immature ascospores appear 3-septate with three eusepta, somewhat similar to ascospores in Novomicrothelia and Pseudobogoriella except for the more numerous septa. However, the two terminal lumina eventually become filled entirely with endospore material and simultaneously inflated, so that the two-remaining central lumina appear much smaller than the thickened terminal walls (Fig. 79f). Given the current distribution of ascospore types among basally diverging lineages in the family, we predict that this taxon represents its own lineage, and placement in Bogoriella, together with the other two species previously placed in Distothelia, would be misleading. 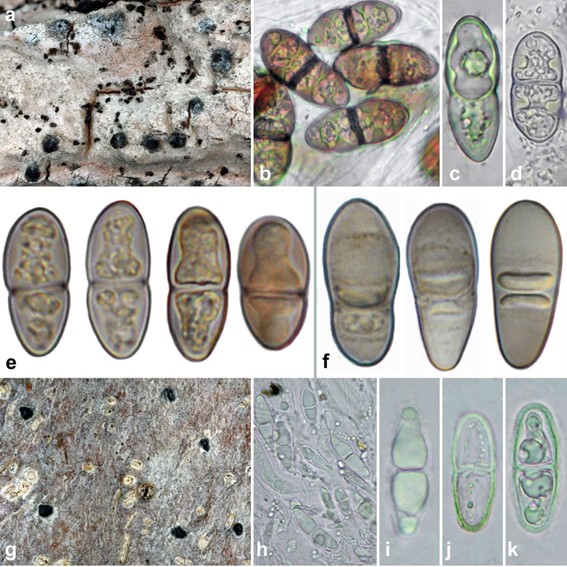