Etymology: The species epithet himachalensis is named for the state from where sample collected (Himachal Pradesh, India).

Notes: The rust fungus examined in the present study has ovoid to globose, unicellular urediniospores and two-celled teliospores which revealed that fungus taxonomically falls under genus Puccinia. Five species of Puccinia have been recorded on Clematis spp.: P. wattiana Barclay, P. ustalis Berk., P. clematidicola Tai, P. atragenes Hausmann, and P. exhausta Dietel (Table 1; Zhuang et al. 1991). After comparison with all, a close resemblance was seen with P. wattiana. In P. wattiana the telia form in more or less concentric circles whereas they are scattered and single in the new species. The teliospores of P. himachalensis are larger than in P. wattiana (39.5–53 × 21–27.5 µm versus 30–48 × 18–25 µm). A light violet to chestnut brown colouration was observed in septa of teliospores which also supports the distinction of present taxa from P. wattiana. The size of the pedicel is also variable as compared to P. wattiana. Therefore, it is justified to introduce a new species of Puccinia. 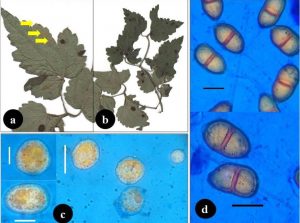