Etymology: From indigenous Chilean and Argentinian Mapuche language mapudungun; “kutran”, meaning a disease and the “-fy”, suffix from Latin “-ficare”, to “make into”. Thus, illustrating the fact that the fungus causes disease.

Culture characters: Slow growing cultures variable in morphology. Optimum temperature for growth between 15 and 20 °C reach- ing 32–35 mm after 28 days in MEA and 24–27 mm on oatmeal agar (OMA; Figure 6). Faster growth observed at 5 and 10 °C than at 25 °C. No growth seen at 30 or 35 °C after 28 days on any tested culture medium. Cultures at 35 °C failed to grow when plates were returned to 20 °C for 14 days, indicating these high temperatures result in their death. Cultures on MEA and incubated at 20 °C were white when young, mostly submerged, with little aerial mycelium, growing radially, with a saffron white to light hazel brown colour un- derneath. Cultures gradually becoming darker and hazel to umber brown in colour, some with saffron to buff grey aerial mycelium at the centre. The reverse side of plates dark, especially at the edges, with a hazel brown to sepia colour. Fully grown cultures flat, round, with either entire or curled margins. Cultures on OMA white, sunken, with aerial mycelium absent or very minimally present, growing sparsely with curled margins. On reverse, cultures white, becoming creamy coloured with time.

Spermogonia were inconsistently observed, only in MEA, and occurred more frequently at lower temperatures (5–15 °C). Produced from the young mycelium at the edges of the colonies, forming a concentric halo at the centre or edge of the colony de- pending on when they are developed. Gregarious or in clusters, obpyriform to spherical when solitary, dark brown to black with a milky white to yellowish spore mazaedium in the top when mature. Spermatia are hyaline, aseptate, shape varies from symmetrical oblong to reniform to asymmetrical obovoid with an apparent constriction in the middle, (3.1) 5.6 ± 1.1 (8.8) µm long and (1.4) 2.1 ± 0.5 (3.4) µm wide.

Notes. Although P. kutranfy described here resides in a novel monotypic genus, it was relevant to compare its morphology with Caliciopsis species described previously from A. araucana (Butin, 1970). In this regard, ascomata were more similar in size to C. cochlearis than to those of C. brevipes (Table 2). Most features were found to be more variable than reported in literature, even for some previously considered diagnostic features such as the position of the ascigerous swelling. Although the ascomata on the cankers most commonly had a subapical ascigerous swelling (similar to those found in C. cochlearis), several ascocarps had a median to submedian swelling (similar to C. brevipes). The ascocarps were similar to those of C. cochlearis in height, but ascocarps on cankers were wider and the subepidermally erupting stromata remained visible at the base of most ascocarps. This was in contrast to those in C. cochlearis where ascocarps appear to erupt directly from the plant tissue. Dimensions of asci and ascospores obtained from ascocarps on cankers were also more variable than those described for C. brevipes and C. cochlearis. Although ascospore dimensions were most similar to those of C. cochlearis, those found in P. kutranfy were slightly larger. Spermatia obtained from spermogonia on cankers were shorter and wider than any of the two Caliciopsis species mentioned above; rather than being allantoid shape, they were mostly ovoid to obtuse. 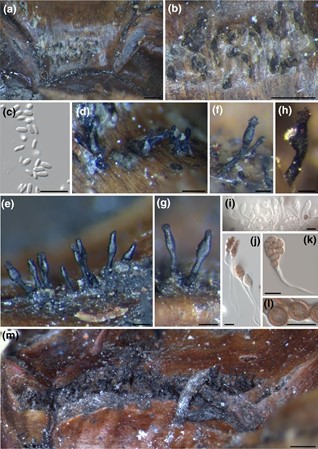