Culture characters: Ascospores germinating on PDA within 24 h and germ tubes produced from apex. Colonies growing fast on PDA, reaching 5 cm in 1 week at 28 °C, under 12 h light/12 h dark, effuse, velvety to hairy, circular, white in first week, dark brown to black after 1 week from below and above.

Notes: Neodeightonia subglobosa was originally collected from Bambusa arundinacea Willd. (synonym of Bambusa bambos (L. ) Vo s s ) in Africa, and int roduced by Punithalingam (1969). Phillips et al. (2008) isolated this species, which causes keratomycosis of the eye, from a human host in an unknown location, illustrated only the asexual morph, and provided a sequence based on the culture CBS 448.91. Phillips et al. (2013) however, indicated CBS 448.91 as ex-type without any justification. Liu et al. (2012a) illustrated the sexual morph of this species based on a new collection. In this study, new isolates and specimens were obtained collected on bamboo in Thailand with both sexual and asexual morphs. Thus a reference specimen is designated here, and these species is re-described and illustrated species, due to no available strain linked to Punithalingam (1969). Punithalingam (1969) stated that N. subglobosa has brown and 1-septate ascospores. 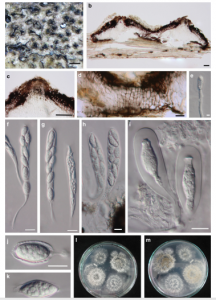