Remarks: The type species of Trichoramalina (Rundel and Bowler 1974), characterized by marginal black hairs, is T. crinita (Tuck.) Rundel and Bowler, a species endemic to the coastal areas of California and Baja California (Fig. 3). Kistenich et al. (2018) could demonstrate that it belongs to Ramalina and our own accessions support this phylogenetical position. The other species with black hairs (“Trichoramalina” melanothrix) is shown to have an isolated phylogenetic position and forms together with Ramalina angulosa (sensu Wirth 2010b) the sister group to all other accessions of Ramalina s. str. Although there are no clear-cut morphological, anatomical or chemical autapomorphies, a new genus is here introduced for this lineage endemic to SW Africa (Namibia and South Africa). Indeed, it diverged from Ramalina c. 48 Myrs ago early in the Eocene, almost simultaneously with the emergence of the MRCA (Most Recent Common Ancestor) of the CVN clade comprising three genera, clearly different from one another on morphological and chemical characters. Further, the basal species of Ramalina s. str. is R. sinensis, an epiphytic species widespread throughout the Northern Hemisphere, a complete contrast with Namibialina and that also started to diversify at c. 20 Myrs.

Two described species are here assigned to the new genus Namibialina: Ramalina melanothrix recovered as a single taxon and “Ramalina angulosa” (Lalley and Viles 2005; Wirth 2010a, b), recovered as a paraphyletic assemblage of three species, with R. melanothrix nested amongst them. All accessions available for DNA extraction and analysis were collected in Namibia, along ca. 120 km of coastline North of Swakopmund. There- fore, we strongly suspect that a complex assemblage is hidden under these epithets, most probably much more diverse along the coastal deserts of SW Africa, from the southern part of Angola down to the Cape of Good Hope. It is currently under study.

Strands of cartilaginous tissue develop longitudinally under the cortex in all species of Namibialina and in several species of Ramalina resolved at the base of the tree, such as R. sinensis and R. celastri. In Namibialina, chrondroid stands are “attached to the cortex”, not isolated in the medulla, the medulla is arachnoid, very thin and supported by a 2-layered cortex, sometimes the external layer indistinct (Rundel and Bowler 1974, Bowler 1981). Another shared plesiomorphy is the lack of secondary metabolites (except for usnic acid in the cortex) in Namibialina and in several basal species in Ramalina (R. celastri, R. fraxinea, R. hoehneliana, R. sinensis and others). However, Wirth (2010b) mentioned several secondary compounds in “Ramalina angulosa”: ± bourgeanic, ± sekikaic, ± 4’-O-demethylsekikaic and ± salazinic acid.

The nomenclature of the above-mentioned epithets can be summarized as follows:

Theodor Magnus Fries (Flora 44: 411, 1861) clearly recognized Ramalina melanothrix as different from what had been assigned to R. angulosa. He referred to an annotation of Johann Friederich Laurer using that epithet for a collection made by Johann Franz Drège “in Africa meridionali”. J.F. Drège is a very famous plant collector in the Cape area (Gunn and Codd 1981) and we can thus assume his specimen was collected in that area. However, in the same section, Th. Fries thoroughly described Ramalina capensis, with two varieties: “Formae duae, quas amplectitur, nominandae: α angulosa Laur. […] ramis apicalibus concoloribus et ß melanothrix Laur. […] apicibus thalli […] nigricantibus“.

Further, a collection assumed to be a type from the Royal Botanic Garden Edin- burgh E is available at: https://plants.jstor.org/stable/viewer/10.5555/al.ap.specimen. e00465255.

There is no doubt that this collection belongs to the “angulosa” assemblage. It has a label indicating it was collected in Tahiti, but annotations by B.J. Coppins (Feb. 1976) reads as “This is a Drège specimen from South Africa”. 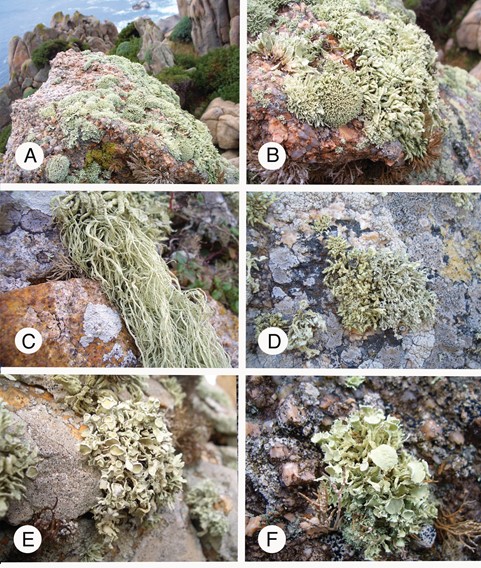 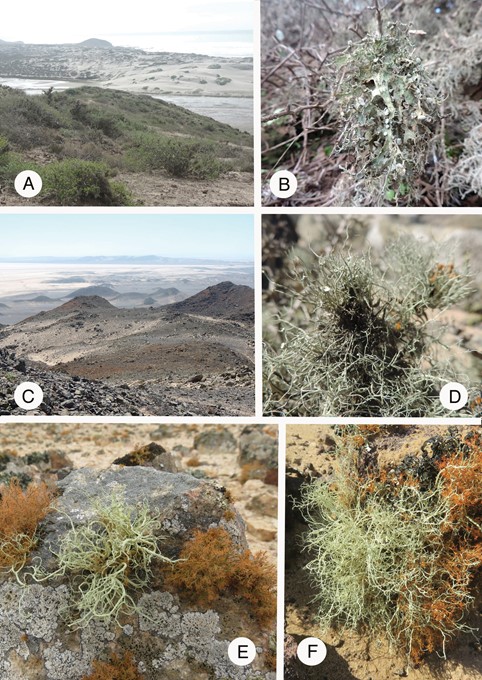