Etymology : Referring to the locality where the specimen was collected.

Notes: Based on multigene phylogenetic analyses, six isolates of D. italica formed a clade close to D. prunicola A.J.L. Phillips & Abdollahz. The novel species differs from D. prunicola by 16 nucleotides in the concatenated alignment, in which five were distinct in the ITS region and eleven in the TEF region. Morphologically, the length of conidia of D. prunicola are smaller (19–30.5 μm) compared to those of D. italica (28.7–43.2 μm). 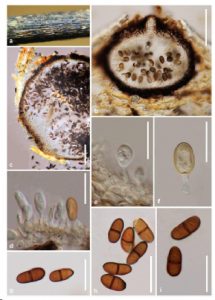