Etymology: The specific epithet ‘‘ulmicola’’ refers to the host plant genus Ulmus, on which the fungus was first collected.

Culture characteristics: Conidia germinating on PDA within 12 h. Germ tubes produced from all sides. Colonies on PDA reaching 22–27 mm diam. after 2 weeks at room temperature, colonies irregular in shape, medium dense, flat to slightly raised, surface slightly rough, with small granular, to velvety, edge undulate with well-defined margin, from above pale orange to light brown at the margin, amber near the margin, with, zonate, pale yellowish to dandelion and dark amber at the centre; from below pale yellowish at the margin, with dark amber at the centre; not producing pigmentation in agar. 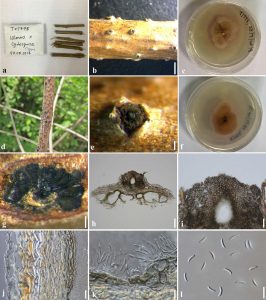