Notes: Coniella vitis has been reported from Vitis vinifera as causing grape white rot in China (Chethana et al. 2017; Jayawardena et al. 2018). Based on our phylogenetic analysis of a combined ITS, LSU, HIS3 and TEF1-a sequence dataset of Coniella species (Fig. 82), our strain MFLUCC 18-0093 clusters together with the ex-type strain of Coniella vitis (MFLUCC 16-1399) with high bootstrap and Bayesian probabilities (100% MP and 1.00 BYPP). When comparing our strain with the type specimen of C. vitis (MFLUCC 16-1399), they are similar in morphology. However, our strain has slightly larger conidiomata, and larger conidiogenous cells compared to the type strain
(Chethana et al. 2017). 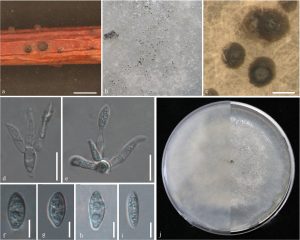