Colonies on YMG and OMA at 23 °C spread over the whole 9-cm Petri dish after 14 days while they attain a diameter of 53 mm on PDA, initially appearing dark brown, then becoming covered with white patches with age (Fig. 1b). Mycelium on SNA, with brown, thick-walled, smooth, branched, septate, 5–6 μm diam hyphae, giving rise to hyaline, thin-walled, smooth, branched, septate, 1.5–2 μm diam hyphae. Colonies remained sterile on SNA, PDA, OA, and MEA (see images in Supplementary information). After several transfers onto new OA agar plates, oval, chlamydospores (5–12 × 8 μm) were formed in short chains, arising from the hyphal tips (Fig. 1e). Even after several months of subcultivation, no other conidiogenous structures or sexual morph were observed either in the old or the newly inoculated plates. The growth maximum was determined to be 28–30 °C, and no growth was observed at 37 °C.

Notes—The new genus Batnamyces is primarily defined based on its molecular phylogeny, since we neither observed the characteristic structures of the asexual nor sexual morph of the species in this genus. Its classification in the family was inferred from the molecular phylogeny that was established on the basis of a multi-locus genealogy comprising representatives of all important genera of Chaetomiaceae. The genera Batnamyces, Canariomyces, Madurella, and Stolonocarpus formed a single lineage (Fig. 2). Canariomyces species typically produce non-ostiolate ascomata together with single-celled conidia arising from reduced conidiophores that are reduced to a hyphal cell (cf. figs. 19–22 in Wang et al. 2019b). Madurella species usually produce only sterile (non- sporulating) hyphae and sparse aerial mycelium, growing re- strictedly in culture and often producing buff, cinnamon, sienna, or orange exudates diffusing into the agar (cf. fig. 18 in Wang et al. 2019b). On the other hand, Stolonocarpus is characterised by non-ostiolate ascomata arising from a stolon-like mycelium and covered by pigmented hypha-like hairs (fig. 41 in Wang et al. 2019b). The genus Batnamyces is more similar to Canariomyces and Stolonocarpus than to Madurella with respect to the morphology of the colonies and mycelia but can be easily distinguished from them by the lack of reproductive structures. Since the ex-type strain of Batnamyces was obtained by using an isolation procedure, which is well established for endophytes, from an endemic plant in an area that has never been studied intensively for the biodiversity of its mycobiota, it did not come as a surprise that no reproductive structures are produced. After all, it is pretty well known that endophytic fungi often do not produce any propagules. However, we isolated the fungus only one time and can therefore not be sure about its actual lifestyle. Poor statistic support (PP < 0.95; ML-BS = 85%) also implied that B. globulariicola was not a member of either Madurella or Stolonocarpus. 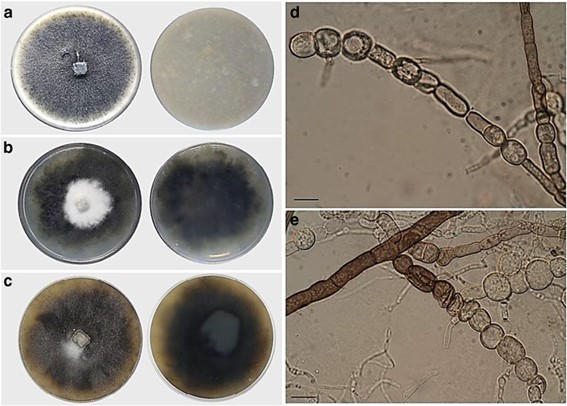