Notes: In its most recent interpretation, R. subg. Compactae (Fr.) Bon, emend. Buyck & V. Hofst. (in Hongsanan et al. 2015) includes species that produce more or less thick-fleshed, very small to large basidiomata with dull to dingy white, brown, grey to black pileus, regularly unequal, polydymous lamellae, a mild to very acrid context that is reddening, greying, blackening, rarely browning and often with unpleasant smell, white spore print and spores with inamyloid suprahilar spot; gloeocystidia mostly capitate with one central knob or more frequently with two excentrical knobs. In a recent multicolus phylogeny (Buyck et al. 2018), this subgenus was shown to be composed of two highly supported lineages: sect. Polyphyllae Buyck & V. Hofst. and sect. Nigricantinae Bataille, which is the core group of this subgenus as it holds the European R. nigricans, the type species. With very few exceptions, species of section Nigricantinae have basidiomata that react most frequently by first reddening on bruising before turning to black. This feature, in combination with the unequal, polydymous gills, is still considered to constitute the easiest field character to recognize species of this section (Das et al. 2020).

A nBLAST of the obtained ITS sequences of our specimens undeniably placed our new species in sect. Nigricantinae with sequences MN075499 (99.51% similarity), MN580113 (99.05% similarity) and JN969389 (99.13% similarity), all three obtained from deciduous dipterocarp forests in Thailand (Pachit et al. 2020, Poshri et al. 2012, Yuwa-amornpitak & Yeunyaw 2020), representing earlier reports of R. boddingii. None of the other sequences from nBLAST results was more similar than 96% to our species, and all suggested a placement of our new species in the R. densifolia lineage.

In recent years, several new Asian species have been published in sect. Nigricantinae (Zhou et al. 2020, Das et al. 2020), but none of these had crowded gills as in the R. densifolia lineage. The latter lineage has been retrieved as a highly supported clade in recent multigene phylogenetic analyses (Buyck et al. 2018, De Lange et al. 2021). So far, only five described species have been shown to be part of this lineage: the European R. densifolia, R. densissima, R. atramentosa and R. fuliginosa, as well as the Australian R. ingwa. Our phylogeny now shows that at least five additional Asian species in this lineage await description. Vidal et al. (2019) proposed an enlarged concept of Laricinae based on their multilocus phylogenetic analysis, including in this subsection one or two additional clades of species occupying a very different habitat as they associate with deciduous trees in the lowland Mediterranean area. Given the ecological differences between Laricinae and these lineages, we think such a wide concept for a subsection needs confirmation. Nevertheless, they demonstrated the abundant occurrence of semi- to fully hypogeous taxa in this larger clade as already suggested by Whitbeck (2003). 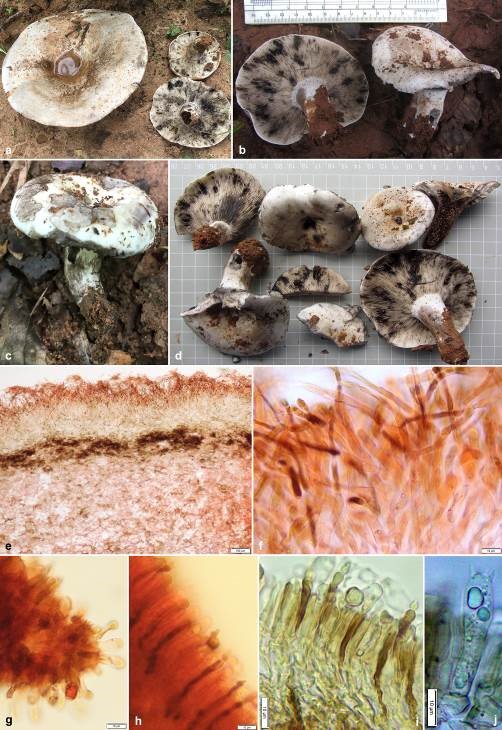