Notes: Phylogenetic analyses of P. diffractum were provided in Liu et al. (2015). Paradictyoarthrinium diffractum is described and illustrated here as it was collected from a different host with the type being collected from a dead decaying spathe of Cocos nucifera. This species has not been illustrated on teak before, and the details including sequence data will be useful for others studying microfungi associated with teak. 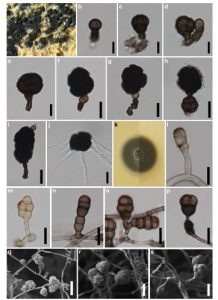