Etymology: The specific epithet ‘thailandica’ refers to the country where the fungus was first collected.

Culture characteristics: Ascospores germinating on MEA within 24 h. Germ tubes produced from any cell. Colonies on MEA reaching 1.5–2 mm diam. after 7 d in the dark at 25 °C, edge entire, flat or effuse or umbonate, sparse, forming ascomata on MEA in the centre. After 7 d colonies white (n) above, from below reddish yellow (o).

Notes: Based on phylogenetic analyses and morphological comparison, our isolate belongs to the genus Ochronectria in the family Bionectriaceae. The morphology of Ochronectria thailandica fits well with the description provided by
Rossman and Samuels (1999). It differs from the type, O. calami (Henn. & E. Nyman) Rossman & Samuels and O. courtecuissei Lechat based on the size and colour of ascomata, peridium colour and number of septa and  imensions of the ascospores. Ochronectria thailandica has black ascomata, a peridium composed of black brown outer layers and yellow middle layers, while, O. calami has white or yellow to orange ascomata, a peridium composed of hyaline middle and outer layers, and O. courtecuissei has yellow to brown ascomata and a peridium composed of yellow to orange outer layers and hyaline middle layers (Rossman et al. 1999, 2001; Lechat 2010). Furthermore, O. thailandica, which has 1-septate ascospores can be distinguished from O. calami which forms multi-septate ascospores. Phylogenetic analysis based on LSU sequence data of the family Bionectriaceae showed that O. thailandica is closely related to O. calami, forming a distinct lineage within the sclade (Fig. 1).

Fig. 1 Phylogram generated from maximum likelihood analysis based on LSU sequence data of the family Bionectriaceae. New taxa are in blue ex-type strains are in bold. The tree is rooted with Trichoderma viride. 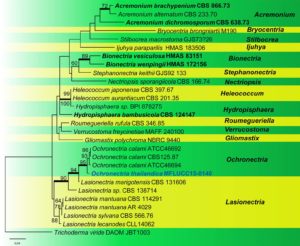 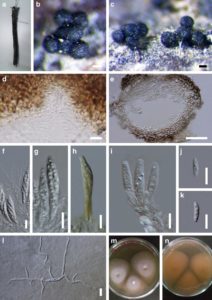