Etymology: Named after the country (Russia), where the holotype was collected.

Notes: Neomicrosphaeropsis rossica is introduced as a new species and this species mainly differs from N. italica, the type species of the genus, in having uniloculate conidiomata which are smaller and recorded from a different host species in a different country (Russia). In the present phylogenetic analysis of combined LSU, ITS, RPB2 and β- tubulin sequence data, N. rossica formed a separate subclade in the Neomicrosphaeropsis clade in Didymellaceae with high BS support (96 %). Neomicrosphaeropsis rossica shares similar morphology with Coniothyrium tamaricis, but the conidial dimensions are slightly different and the taxa are recorded from different hosts (Tamarix gallica L.) and continents (Saccardo 1902). Therefore, C. tamaricis can be another species that may represent Neomicrosphaeropsis and needs to be recollected from the same location and analyzed with gene sequence data to confirm its placement. 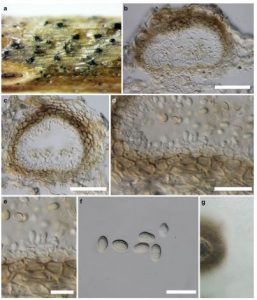