Etymology: Derived from latin sardous, relative to the Sardinia, the region where it was first found.

Habitat and known distribution: In coniferous forest, only known from Sardinia (Italy).

Notes: Species in the genus Musumecia are characterized bytheir clitocyboid basidiomata, stipe more or less enlarged at the base, and more or less amyloid basidiospores. However, M. alpina has a dark grey, zonate, and fibrous-tomentose or pubescent pileus with the disc subumbonate in age, slightly larger basidiospores with granular decorations on the surface, often 2-spored basidia, and this species has cheilocystidia, pleurocystidia, and abundant clamps. Three European species have slightly larger basidiomata, shallowly depressed or infundibuliform or pileus in age, commonly 4-spored, smooth basidiospores without any decorations on the surface, absence of cheilocystidia and pleurocystidia. Additionally, there are no or rare clamp-connections in their basidiome. Musumecia bettlachensis has an ivory-white or cream-white glabrous pileus sometimes with a small umbo when young, somewhat smaller basidiospores (5.5–8.5×3.5–5μm), and lacks rhizomorphs (Vizzini et al. 2011). Musumecia sardoa has an infundibuliform, dark reddish brown, pubescent pileus, and amyloid spores. Musumecia vermicularis has an infundibuliform minutely tomentose pileus lacking umbo, and smaller basidiospores (6.5–7.5×3.5–5μm) (Musumeci 2014). The discovery of M. alpina in southwestern China suggests that Musumecia has a much wider geographical distribution ranging from East Asia to Europe. Musumecia alpina is here reported from an alpine region of southwestern China, growing in very different climate conditions.

Musumecia alpina and M. sardoa introduce some aberrant features for the genus: the first displays minutely ornamented spores, abundant clamp-connections, and hymenial cystidia; the second is characterized by its amyloid spores. As a matter of fact, the genus Musumecia shows a marked macro- and micromorphological heterogeneity while evident shared morphological features are currently unknown. Incontrast, its molecular homogeneity is very high and all Musumecia species so far known appear as a well supported monophyletic clade. Future work will be necessary to assess the presence of yet undescribed unifying morphological and/or physiological characters. To date, four taxa were reported in this genus. A key to the known species in Musumecia is provided above. Yunnan region is one of the major biodiversity hot spots in the world. Over 4000 species of fungi from different groups have been identified in this area during the last decades (Zhang et al. 2005; Li et al.2009, 2011b, 2014b; Yang et al. 2012, 2013, 2015; Zeng et al.2013, 2014; Hao et al. 2014; Songetal.2014; Tang et al.2014; Zhao et al.2014).Research is needed to confirm if this is a truly disjoint distribution or else there exist specimens of M. alpina or other related taxa in the intermediate regions of Central Asia. 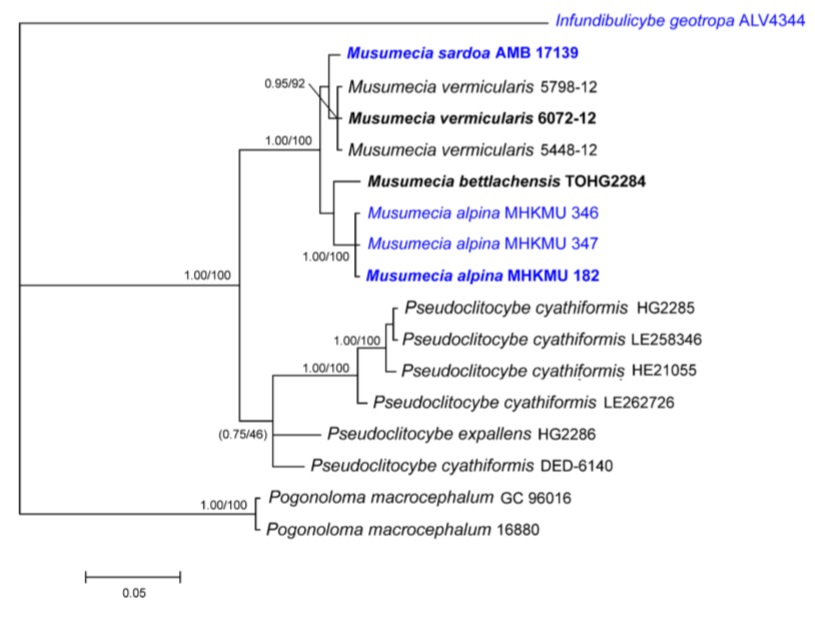 Phylogenetic relationships of Musumecia based on ITS sequences data. Bayesian posterior probabilities (PP≥0.90) and RAxML bootstrap values (BP≥70 %) are shown above or below the branches. New taxa are in blue and ex-type specimens in bold 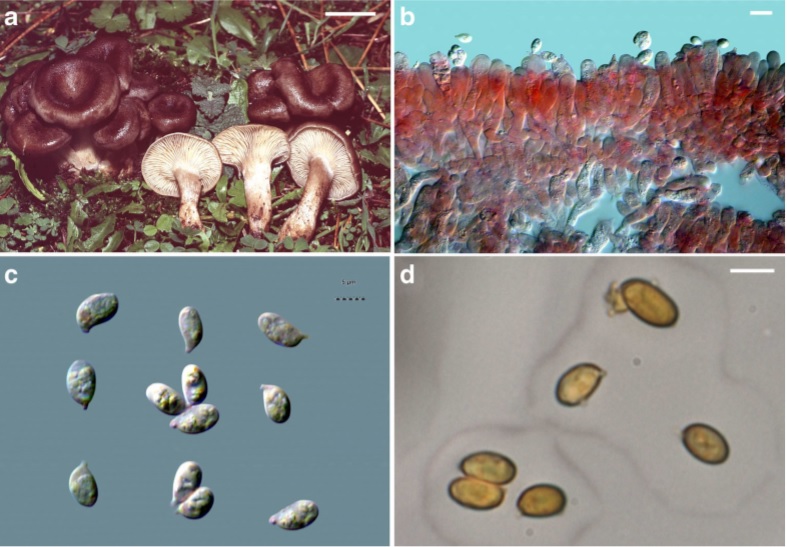