Culture characteristics: Cultures were obtained from germinating conidia. The conidia germinated within 24 h on PDA. The colonies on PDA grew slowly, to approx. 5 mm diam. after 2 weeks at 20 °C. The stromatic colonies formed a compact mycelium. The cream to pale yellow conidial mass covers the stromatic colonies.

Notes: The sexual morph of this species was not found in the field although several attempts to find it were made throughout the year. The asexual state of Moelleriella pongdueatensis is similar to Aschersonia basicystis Berk. & M.A. Curtis (sexual morph Moelleriella basicystis P. Chaverri & K.T. Hodge) reported from Costa Rica, Cuba and Panama by Chaverri et al. (2008) based on stud-shaped and pale yellow stroma, and yellow mass of extruded conidia, around a narrow neck. The conidia of M. pongdueatensis, however, are somewhat smaller; the conidia are fusoid, 9–12.5 × 1.5– 2.5 μm, with paraphyses up to 110 μm long. In contrast, Aschersonia basicystis conidia are ventricose, (11–)13–13.5 (–15.5) × (3–)4–4.2(–5) μm, with acute ends, paraphyses are absent. Based on our study, Moelleriella pongdueatensis is the second species that show the presence of hirsutella-like synanamorphs simultaneously occurring on stromata in nature. Tadych et al. (2009) first reported M. zhongdongii having both Aschersonia and hirsutella-like synanamorphs on stromata in nature along with the Moelleriella sexual morph. Phylogenetic analysis Independent maximum parsimony analyses were done for each gene. Comparisons of the bootstrap supports for the nuclear large subunit rRNA gene (LSU) and RNA polymerase II subunit one (RPB1) gene datasets showed no significant contradictory nodes, and where the bootstrap supports were ≥70 % the strains were prepared to make a combined data set for both LSU and the RPB1 for analysis. The combined dataset for the LSU and RPB1 sequence data consisted of 1447 characters, 986 of which are constant, 50 are variable and parsimony-uninformative,while 411 are parsimony-informative. Maximum parsimony analysis of the combined dataset of LSU and RPB1 resulted in 12 most parsimonious trees. Maximum parsimony analyses of this data set yielded one parsimonious tree (tree length 1540; CI = 0.455, RI= 0.802, RC= 0.365, HI= 0.545). 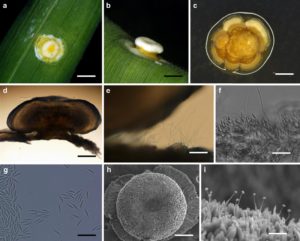