Meliolaceae is the largest group of epifoliar fungi characterized by larviform ascospores and dark brown hyphae with phialides and 2-celled appressoria. Members of this family are unculturable, and host information is the primary criterion for their identification. The phylogenetic relationship of several genera in Meliolaceae are shown. 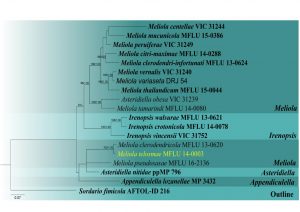