Etymology: From the Latin lignin refers to wood and sphaeria meaning fruiting body, in reference to the fruiting bodies on wood.

Fig. 1 RAxML tree based on LSU sequences alignment. ML bootstrap proportion (BP) greater than 50% is presented above the nodes. The branch with Bayesian posterior probabilities (PP) above 0.95 are thickened. The original isolate numbers are noted after the species name. The scale bar shows 0.02 changes and the tree was rooted to Hysterium angustatum (CBS 236.34) 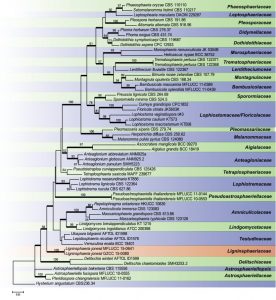