Saprobic on decaying inner-surface of bark of T. grandis. Sexual morph: (see Boonmee et al. 2014). Asexual morph: Colonies on natural substrate, superficial, gregarious,scattered, hyaline to subhyaline hyphae. Conidiophores up to 195 μm long, 6–15 μm wide at the broadest part, macronematous, mononematous, erect to slightly flexuous, slightly constricted at the septa, arising from hyphae, with dense fascicles, simple, pale brown to reddish brown at the base, paler or yellow to sub-hyaline towards the apex, swollen at the base, acuminate at the apex. Conidiogenous cells monoblastic, hyaline, cylindrical, 2.5–5 μm slender and rounded at the apex. Conidia 42–44μm diam. when coiled, coiled into 2 1/2–3 1/2 spirals, loose to tight, filaments 2.5–7.5 μm wide, 27–31-septate, acropleurogenous, helicosporous, hyaline to pale brown, obviously septate, slightly constricted at the septa, darkened, tapering towards the rounded apex, conico-truncate at the base.

Culture characteristics: Conidia germinating on PDA within 24 h. Germ tubes produced from all cells of conidia. Colonies on PDA reaching 13–18 mm diam. after 7 days in the dark at 25 °C (x = 16 mm, n = 5), edge entire, flat or effuse at the edge, convex with papillate surface at the old mycelium plugs, sparse, olive grey (3F2) in the center, white (3A1) from both above and below.

Notes: Helicoma siamense was introduced by Boonmee et al. (2014) with the sexual morph occurring on decaying wood of an unidentified tree and the asexual morph produced on MEA. We collected the asexual morph on T. grandis from the decaying inner-surface of the bark. Morphologically He. siamense collected in the current study and that of Boonmee et al. (2014), differ in conidial size and shape as well as conidiophores. However, as one specimen was produced in culture from single ascospore isolations, and the other was collected from natural substrata, differences in morphology might be expected. For this reason, the collection from T. grandis collected in this study is illustrated and described here. 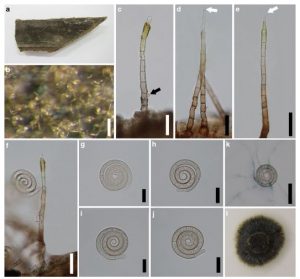