The ordinal name Glomerellales (Index fungorum number: IF 515429) including Colletotrichum (= Glomerella) and three other genera in a non-ranked group “Eu-Glomérellales” was introduced by Chadefaud (1960), but was not validly published. Réblová et al. (2011) proposed Glomerellales to accommodate the families Australiascaceae, Glomerellaceae and Reticulascaceae based on morphology, as well as analyses of ITS, LSU, SSU and rpb2 sequence data. Maharachchikumbura et al. (2016b) established the taxonomic position of Plectosphaerellaceae in Glomerellales. Tibpromma et al. (2018) introduced a monotypic family, Malaysiascaceae to this order based on morphology and phylogeny. The divergence time for Malaysiascaceae has been estimated as 44 MYA, which falls in the genus status (Fig. 14). Therefore, the status of Malaysiascaceae may need revision following further study. The divergence time for Glomerellales has been estimated as 216 MYA (Fig. 2). Currently there are five families and 32 genera in this order 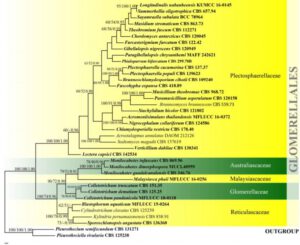 Figure 1 – One of the 100 most phylogenetic tree generated by maximum parsimony analysis of combined LSU, ITS and tef1 sequence data of species in Glomerellales. Thirty-eight strains are included in the analyses, which comprise 2162 characters including gaps (800 characters for LSU, 558 characters for ITS, 793 characters for tef1) after alignment. Pleurothecium semifecundum (CBS 131271) and Pleurotheciella rivularia (CBS 125238) (Pleurotheciaceae, Pleurotheciales) are used as outgroup taxa and the tree is rooted with. Single gene analyses were carried out and the phylogenies were similar in topology and clade stability. Tree topology of the maximum parsimony analysis is similar to the maximum likelihood and Bayesian analysis. The maximum parsimonious
dataset consisted of 1189 constant, 630 parsimony-informative and 343 parsimony-uninformative characters. The parsimony analysis of the data matrix resulted in the maximum often equally most parsimonious trees with a length of 2672 steps (CI=0.522, RI=0.666, RC=0.348, HI=0.478) in the first tree. Bootstrap support values for MP and ML greater than 50% and Bayesian posterior probabilities greater than 0.90 are given near the nodes. Ex-type strains are in bold. The newly
generated sequences are indicated in blue.