Notes: During our study we observed the holotype of Extrawettsteinina minuta (NY, 01103003) collected by H. E. Bigelow (19 August 1957) from Juniperus communis but we could not find any ascomata in the type material. Therefore we examine another collection of E. minuta (NY, 4278), which was collected from same host and by the same collector as present in Fig 15.

Extrawettsteinina was introduced by Barr (1972) and typified with E. minuta. The genus was introduced to accommodate three species, i.e. E. minuta, E. pinastri M.E. Barr and E. mediterranea (E. Müll.) M.E. Barr which are saprobic on the dead leaves of gymnosperms and angiosperms, in North America and Europe (Barr 1972). Subsequently, a fourth species was introduced, viz. E. andromedae (Auersw.) M.E. Barr (based on Wettsteinina andromedae), (Barr 1987a). Extrawettsteinina is characterized by superficial, conical ascomata, containing a few saccate bitunicate asci, ellipsoidal, obovate-clavate, septate, smooth and hyaline ascospores which turn dull brown at maturity (Barr 1972). The diagnostic character of Extrawettsteinina is its conic ascomata which are superficial on the substrate, and radiating arrangement of wall cells, which makes it distinguishable from comparable genera such as Stomatogene and Wettsteinina. Morphologically, Extrawettsteinina is comparable with Kriegeriella. In particularly, E. pinastri could not be distinguished from K. transiens or K. mirabilis. Thus, K. transiens, including Extrawettsteinina pinastri, was treated as synonyms of K. mirabilis, and was included in the section of Kriegeriella (von Arx and Müller 1975; Barr 1975). The other section of Kriegeriella, Extrawettsteinina, includes two previous Kriegeriella species, i.e. K. minuta and K. mediterranea. Barr (1987b) introduced a family, Kriegeriellaceae (Dothideales) to accommodate Kriegeriella and Extrawettsteinina. This proposal has rarely been followed. 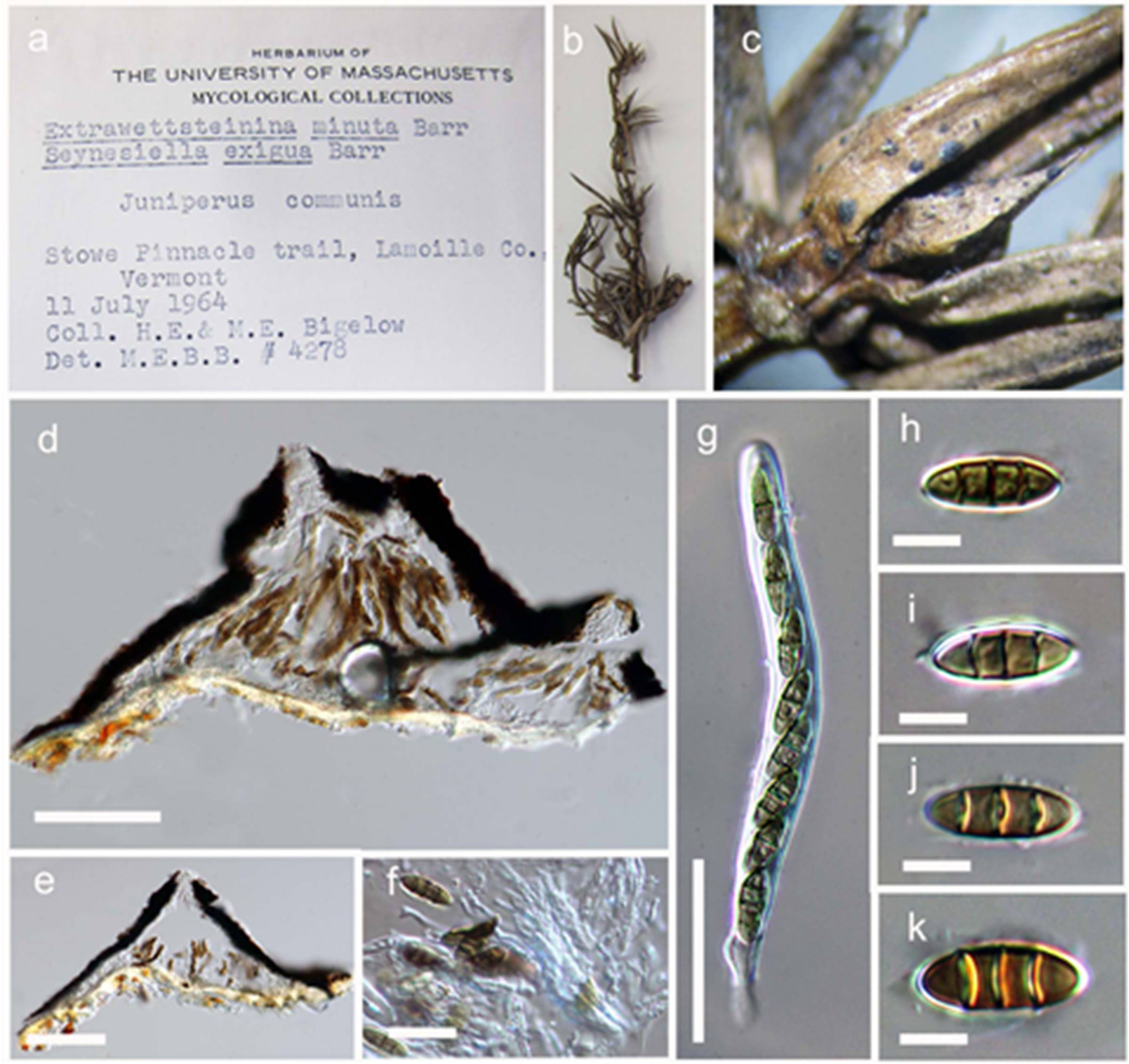