Etymology : magnoliae, referring to Magnolia grandiflora, the only host known for this species.

Cultural characteristics : on PDA colonies flat and filamentous, initially leaden grey in the centre, becoming smoke grey at the margin, with white appressed mycelia radiating outwards, forming smoke-grey to olivaceous-dark at the surface and brown-dark at the reverse after 7–10 days. Colonies extending to ca. 66 mm diam after two weeks in the dark at room temperature.

Notes : Dothiorella magnoliae differs from other species of Dothiorella in having 1-septate conidia deeply constricted at the septum (Fig. 1) (Table 2). Morphologically, D. magnoliae resembles D. westralis (W. M. Pitt et al.) Tao Yang & Crous (mean L/W: 1.9), but differs from this species in its larger conidia with rounded apex and base. The conidial size of D. magnoliae is comparable with those of D. plurivora (Abdollahz. et al.) Tao Yang & Crous (Table 2), but they differ in conidial shapes in that most conidia of D. plurivora have a truncate base, while those of D. magnoliae are unique with rounded ends (Abdollahzadeh et al. 2014, Yang et al. 2017) 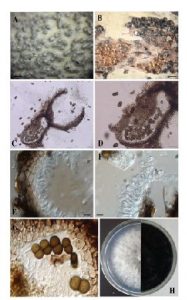