Catabotrys species are generally saprobes on plant leaves or petioles, and they are also reported as endophytes in China (Wu et al. 2014a). There are two species listed in Index Fungorum (2020), and a new collection of C. deciduum is described and illustrated in Fig 1. 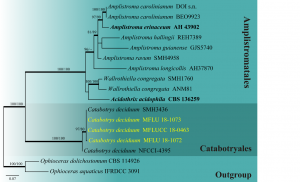