Etymology: from pteridospora meaning winged spore and aqua referring to its presence in water.

Notes: Aquapteridospora is described herein as a monotypic genus that was collected on a submerged decaying twig in a stream in Thailand.

Fig. 1. Maximum likelihood (ML) majority rule consensus tree for the analyzed Sordariomycetes isolates based on a dataset of LSU sequence data. RAxML bootstrap support values (ML) are given at the nodes (ML). The scale bar represents the expected number of changes per site. The tree is rooted with Botryotinia fuckeliana and Dothidea sambuci. The original isolate numbers are noted after the species names. The new strain is in blue bold and morphologically similar strains are in red. Orders and subclasses are indicated as coloured blocks. 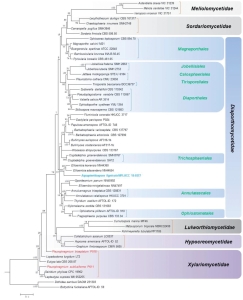