Host/Distribution : from branches of Ginkgo biloba in China.

Cultures : Cultures growth on PDA were initially white later producing a brown pigment on the reverse side after 7–10 days. Colonies were uniform with abundant white aerial mycelium.

Notes : Morphologically, Aplosporella ginkgonis is characterized by its multilocular conidiomata with one to four ostioles, and aseptate, brown, ellipsoid to oblong conidia. Phylogenetically, two samples of A. ginkgonis formed a distinct lineage with high support (MP/BI = 100/1) in the combined ITS and tef1-α analysis. Strains CFCC 89660 and 89661 had been misidentified as A. longipes based on host association; however, these strains differ by their larger conidia (16–20.5 × 6–7.5 vs 12–20 × 5–6 µm) and represent a unique species of Aplosporella from Ginkgo biloba (Saccardo 1899). Both morphology and the sequence data confirmed that the two samples represent a new species in Aplosporella using the guidelines for new species in Jeewon & Hyde (2016). 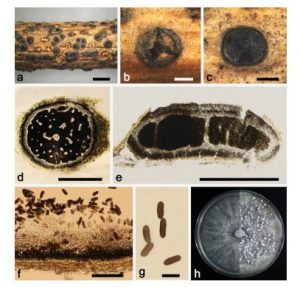