Culture characteristics: Conidia germinating on PDA within 24 h. Colonies on MEA reaching 38–50 mm diam. after 7 days in the dark at 25 °C (x = 28, n= 5), circular, fimbriate, fluffy, convex with papillate surface in the center, flat or effuse at the edge, aerial, dense, grey (4E1) from above, olive brown (4F3) from below.

Notes: Alternaria tillandsiae strain MFLUCC 12–0383 inthis study was observed on a necrotic leaf lesion in Muang District. No other similar lesions were observed in all collections in this study. Given that the type was collected on Tillandsia usneoides, which is a bromeliad from the USA, and has not been recorded on another host (SMML database accessed 6-Feb-2016) it would seem unlikely that this is the same species. The morphology varies from the type description, however, the type is from a culture, whereas this collection was from host tissues which might explain the morphological differences. The conidia of this collection are shorter and smaller (50–90 × 8–14 μm versus 70–102 × 16–19 μm) than those reported by Simmons (2007) for the type, However, phylogenetic analysis supported this collection as A. tillandsiae. This is the first report of A. tillandsiae from T. grandis in Thailand therefore, details are provided to facilitate identification of this species if it is subsequently recorded again on teak 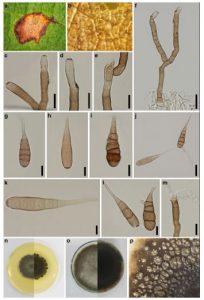