Notes : Antennulariella was introduced by Woronichin (1915) and now includes five species (Kirk et al. 2008, Index Fungorum 2013). Hughes (1976) has seen many collections which have characteristics similar to those of the type species as illustrated by Woronichin (1915). Phylogenetic estimates of Capnodiaceae and distribution of characters and classifications using character compatibility analysis show that Antennulariella and Acrogenotheca form one group; this group produces ascospores which have only one septum at maturity in the ascus, the spore dispersal strategy incorporates delayed states of hyphal initial germination and growth so that septation and pigmentation develop in steps, usually outside the ascus (Reynolds 1986). 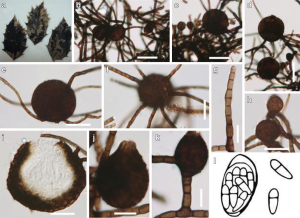